It’s been an unexpectedly delightful day today, because Al and co have been here most of the day. I knew they were dropping in, but expected a more fleeting visit.

My personal thermostat has gone haywire again.  I woke at 4 am, awfully hot.  I couldn’t sleep, even with the bedclothes thrown off, so listened to the radio (Mansfield Park, Second Holmes, two Inspector Resnick episodes) and dozed a bit, until I was so cold I had to turn on the electric blanket.  I also listened to the rain.  When I woke for good, about 7.30, I stayed put and read the paper, when R kindly brought it, and didn’t get up until – ahem – nearly ten o’clock.  No, I know no shame, darlings.  Saturday is my day off.  And I did then cook us both poached eggs for breakfast.

It’s Hadrian’s 3rd birthday on Monday and we won’t see him then, so we gave him his present today – toys for a sandpit and the sand for it, and a blow-up paddling pool.  It seems to have gone down well.  We also inspected the tortoises, went to the local shop to look at small animals and fish and the children found out that ladybird larvae and pupae look quite peculiar but are highly valued and not to be disturbed, even if there’s an area of the garden that Z really wants to cut down.  It has to wait.

I’ve just had an email from Dilly, telling me that Hay has been pouring lentils through his water/sand wheel and then took it to his bath.  So that seems to be a success.

After they’d gone, R got out one of his old cars, the one that he calls Al Capone and I call Bugsy Malone – it’s not old enough for either but the point is the ‘suicide doors’ that open the wrong way.  He’s had it on the road since last July, but has never taken me out in it before.  Today, we went to the supermarket. 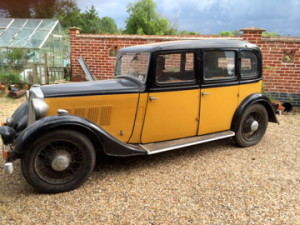 4 comments on “Z is taken for a ride”