Mike knows how enthused I was when he showed me items from his collection and I was surprisingly excited by the old tractors, some of them 90 or so years old, that we saw the other evening.  When I was a child, I’d have loved to have toy cars and trains but no one ever knew – one was not brought up, in those days, to be demanding and I never mentioned  it.  So I’m not sure that old cars and weapons are boys’ toys really.

R has only two vintage cars, both of them Rovers – some of you have been introduced to this one and I’ve put up photos of it.  It dates from 1928 and was R’s first car, which he bought before he learned to drive. 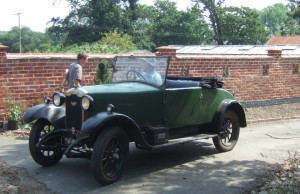 Yesterday’s photo was of a more recent acquisition, though he’s had it for quite a few years – it’s only been on the road since last June, though.  There are also two Morris Minors, one of them belonging to Al and a 1961 Mini which is Ro’s.  We haven’t driven the Morrises for a long time, but the Mini had its first spin a few weeks ago – I expect I mentioned it at the time.  Here it is. 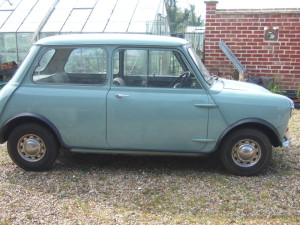 Today, I’ve mostly been mending the greenhouse, or rather replacing broken glass, and watching a newly-hatched ladybird.  It’ll take ages for those photos to upload, so that will be a post for another day.