I still am not sure how come the door was open, but I am pretty sure it was Russell because it happened again this afternoon, soon after he had gone indoors to make some tea.  Stephen and I saw Ben run up to the kitchen garden gate and wait hopefully for us to open it for him.  He was very good, waited for me to hold him and I went to get his lead (leaving Stephen in charge) and let him play for a while.  I really do want to let him run freely,  but I have to have some confidence that he won’t run on the road.  Fortunately, his memory isn’t very good, so if he hasn’t done anything for a couple of weeks, he forgets all about it so, as long as you stop him doing something unsuitable quite quickly, the habit doesn’t become entrenched.

I think it’s Russell’s bunch of keys, which was hanging in the keyhole – when he pulled the door to, they get in the way and didn’t catch.  But I’m not sure, I’ll ask him not to leave them there anyway.

I’ve had a slight and non-serious meltdown in the last couple of days – this has meant nothing dramatic, it’s just that I haven’t felt able to do any paperwork.  As a result, I’ll have loads to do in the next couple of days.  I’m quite cross with myself, but I can’t help it.  I’ve had so little sleep that I can’t concentrate, and the thought of getting on with the work makes me want to hide in a corner.  As long as I don’t think about doing it, I’m fine and perfectly cheerful.  I think I must do one thing tonight, but the rest will wait – it’ll go all the quicker when I feel determined, not overwhelmed.  I had a bit more sleep last night and hope for better things tonight.  I might try writing things down, seeing what sort of pattern there is.  At present, I know that it doesn’t seem to depend on caffeine or alcohol, I manage a couple of good nights’ sleep a week and a couple of very poor ones and that I often wake up feeling very hot, though half an hour later I’m chilly enough to want to put the electric blanket on low for a while.  I might do a sleep blog (because if I put it all here I’ll send the lot of you to the land of Nod) though I wouldn’t expect anyone to want to read it, because it’ll be earnest and desperately boring.

I went to my Ladies Who Lunch club today.  A few months ago, one of our number had forgotten her cheque book (I know, how retro to use one) so I paid her sub and for her lunch.  I said there was no hurry, whenever we were next together, but a week or two later, a cheque arrived in the post.  I put it on my desk and only got around to paying it into the bank last week.  As I waited in the queue (I was doing something else there too, I hadn’t gone in specially) I looked at it – she’d written Thirteen pounds and £31.  Heh.  Easily done.  So today, I told her about it and the Treasurer looked up what it actually should have been: £31.50.  She was quite embarrassed, but there was no need of course – anyway, I ambled off to the bar for drinks (one each, you understand) and she corrected it.  When I got back, the Treasurer was giggling, Theo having gone away for a few minutes.  “You’d think she was quite buttoned-up, wouldn’t you?” she said, “but she just said to me ‘ I made a complete balls-up of writing that cheque!” This is a maiden lady (the mere word unmarried would not do) in her 80s, who used to work for the Foreign Office and has never been heard to swear or even use slang.  Balls-up seemed so inappropriate from her lips.  I giggled too. 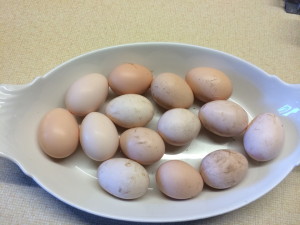 The chickens seem to have taken their move in their stride, because these are the eggs they have laid since their move – there were three more, in fact, but I left them to encourage them.  R tends to leave an egg with a cross on it, so as not to bring it in (he sometimes forgets and the cross is faint, so I’m cautious when I check them previous to cooking) but I think I’ll buy some pot eggs – dummies, so they think that no one is stealing their eggs.  We found three more bantams in the garden, which must have hidden from us when the rest were being moved – they were very good and quickly were caught. So that seems to mean we have 29 chickens and one cock.  They are very tranquil and chatter happily, and are quite unafraid of me, which I’m pleased about, having grabbed them all in such an undignified manner the other day.  They are so sweet-natured, not one of them tried to scratch or peck throughout the ordeal. 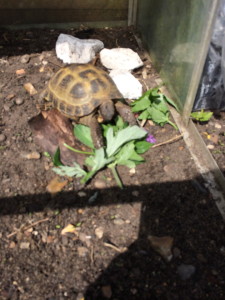 And here is Edweena, about to tuck into a huge meal.  Not having eaten for a few days, she was hungry both yesterday and today – she has really enjoyed the heat of the sun, has ambled round her enclosure, sat on stones to bask and nibbled the patch of clover I planted.  She’s transformed from the moody tortoise she used to be, now she has plenty of room.  She has a choice of two places to sleep under cover and enjoys the (slightly) varied terrain, which is something I’ll have to improve further.  It’s been a lesson to me, watching a reptile which I’d not have thought would have strong emotions react favourably to an improvement in her surroundings – not that it was bad before, and I don’t really see how I could have done better, nor that I can next spring when she wakes from hibernation.  I think the answer, or part of it, might be to keep her in the greenhouse for a while at the end of the summer, so that she goes to sleep a few weeks later and therefore can be left to hibernate longer.  But there’s still a summer to go before I need worry about that.