We’re counting tomorrow as our second wedding anniversary, as we got married on a Saturday.  The anniversary itself is on Monday, of course, but LT has to be in Reading that day.  So champagne will be drunk tomorrow instead.

We haven’t got any other plans, admittedly.  But LT has much the same attitude to birthdays and so on that I have – that they’re nice but the day itself doesn’t matter that much.

It’s just occurred to me to hope that he hasn’t bought me a present, because if he has I can only accept it graciously, as I haven’t bought him one.  What is the second wedding anniversary, anyway?  I know the first is paper.

I’m still looking after Rose’s animals, as she’s away for a few days and so is Boy.  This morning, Eloise cat followed me through to the annexe and waited to be let out of the back door.  But I could see, which she couldn’t, that Chip was waiting to come in.  They’re still implacable enemies, by Eloise’s attitude rather than Chip’s, so I scooped her up before opening the door.  They were both affronted but able to ignore each other and pretend the near-meeting hadn’t near-happened.  Rummy, Rose’s other cat, has been a total arse for quite a while with the barn cats.  He doesn’t always snarl and chase them, but often enough.  But he made the mistake of doing it in front of Rose herself; and, even, snarling at her when she ticked him off.  So she has said he mustn’t be fed with them any more.  I was very doubtful about this, though I was going to do as she said.  Rummy is her cat, therefore her rules.  And, to my surprise, though not to LT’s, it’s working.  He complains, but he accepts it.  And today he avoided the situation by ducking into the chicken greenhouse to look for rats, when I was going down to feed the Barnies.

RasPutin is still on the thin side, but healthy with a good coat now.  So whatever problem there had been, it seems to be over.

In other news, the catalogue for the next sale has been printed and I posted the address labels to my colleague David today, because he deals with the most tedious part, that of stuffing envelopes.  And the Antique Collector magazine was delivered today and the advertisement looks good.

I can show you the photo, actually.  Here it is. 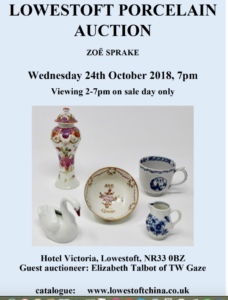 2 comments on “The thought that counts”