It’s been a productive day, if not the most cheering one.  Al, Dilly and Hadrian arrived this morning and spent several hours turning out Stuff.  Nothing vital was found, unfortunately, which is a bit bewildering as there are a few things I really did expect to find in that room, but never mind.  I just have to keep on looking.

Then the valuer came and we spent several hours going over the whole house. This is, in some ways, the worst bit about the whole thing because it’s so insulting to me – he isn’t, it’s the Probate system – but never mind.  One just gets on and deals with it.

In the middle of it all, the phone rang and I left it to the answerphone, but it turned out to be a friend who lives in Cornwall who had only just found out that Russell had died, because he’s mentioned in this week’s Ant1qu3s Tr@de Ga223tt3.  So I had to pick up the phone and speak to him.

Later, a fairly dull but necessary and good-humoured meeting at school, going through documents very thoroughly.  All the most pedantic people were there to discuss present participles, gerunds, why the sea is boiling hot and whether pigs have wings.  If we hadn’t all started joking, I daresay we’d have finished earlier, but we ended up trying each to outdo the others in nit-picking.  I considered buying fish and chips on the way home, but didn’t, as I’d bought some chicory yesterday and thought I’d better eat some of it.  It’s not my favourite,but I just fancied it. 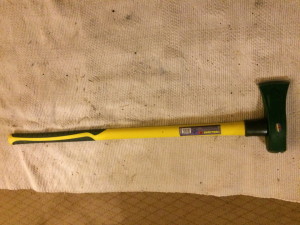 Here is my splendid new axe.  There’s nothing to show the scale, so I’ve just measured it and it’s 90cm long, just under 3 feet.  It’s heavy too, the head weighs 6 pounds, which I suppose is about 2.7kg.

I’m tired, it’s been a bit much overall, but it’s good to have yet another job ticked off the list.  I’ve got several more things to be done by this time next week, and then I’m going to see the solicitor again.

10 comments on “Z’s furniture is evaluated”