Today, it mostly rained.  Not very hard, but fairly consistently.  So I thought it was a good opportunity to work in the greenhouse.  I needed more compost, so suggested to Russell that we should have lunch at the nice little café at the local garden centre – we had bacon sandwiches, he had soup too, I had coffee. 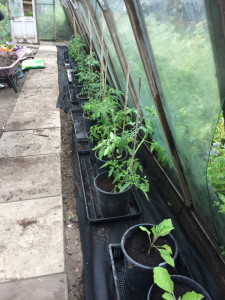 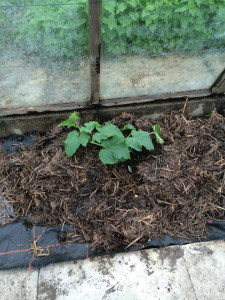 I spent a couple of hours potting up plants – four cucumbers, eleven tomatoes, two aubergines, six peppers, three chilli peppers, plus various plants for Ronan and Weeza – I’ve already given some to Al and Dilly.  I’ve a couple more courgette plants than I want, and am going to be trying to give the buggers away all summer.  Yet it’s impossible to destroy a healthy non-weed plant.

I’m going to meet Weeza and the children and Ro for lunch in Norwich tomorrow.  An unexpected meeting is to happen in the morning at the school first.  Too much to think about, only bloody-mindedness keeps me going.  There’s a fair bit of that in reserve, fortunately.