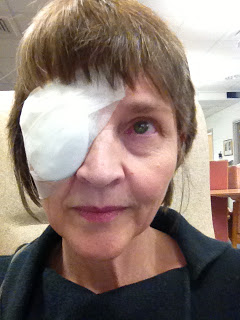 Yo ho ho, darlings, I may have missed Talk Like a Pirate day, but at least I can look like one for a couple of hours.  I can take this off soon in fact, but I’m keeping it on for long enough for the children to laugh at me.

I’ll put in photos, but to save you from any gruesomeness you’d rather not see, I’ll insert a break and put them after that (I hope I can work out how to do that).

First they sent me downstairs to the medical photography place to have pictures taken.  I felt a bit of an idiot, having a young man asking me to look at the camera, look at the ceiling, sit up straight, left a bit…while he took photos of a lump on my eye.  Then back to the eye unit – it had taken half an hour’s waiting, so someone had gone ahead of me, but that was okay.  A sweet nurse called Zerlina (that is, her name was the same as little z’s real one) took my blood pressure, which was 151/82 and therefore quite a bit higher than usual, and asked me to read the chart.  I was wearing my glasses and was able to read it from top to bottom with either eye, which rather impressed me, as I can’t always do that.

I waited a bit longer – Dilly and Hay were with me, but eventually went off to get some tea – and another nurse came and gave me some plastic bags to wear over my shoes – that is, they were elasticated and intended for the purpose – and then took me through to sign the consent form.  The surgeon met me there and went to get ready.  I was given a head cover, highly becoming I’m sure, to keep my hair out of the way, anaesthetic drops were put in my eyes, then iodine to clean the eye to be done, then we went into the theatre.  Once I was lying on the operating table, I had another drop put into my right eye, then he injected a local anaesthetic into my eyelid,* then it was clamped open.  The lights were extremely bright.  The procedure itself was very quick.  When he started to put the clamp on, I began the 17 times table, which is the best for distraction purposes.  May, the nice nurse, held my hand but I didn’t need to squeeze, I saw the lesion being dropped into the bowl as I reached 17 times 5 is 85.  The surgeon said he reckoned it was a mole.  It’ll be sent for analysis, but no one thinks it’ll be a problem.

Then he put the eyepatch on me, I was told to keep it on for a couple of hours and that I’d be given eyedrops and to return in a few weeks, and I sat up and left the room.  I’ve got an advice sheet and the drops and Dilly has asked us in to dinner tonight so that I don’t have to cook.  I must be careful for a few days, not bend over or lift anything heavy so that it doesn’t bleed.  No stitches, but he cauterised it.

So that’s done.  Here are the ‘before’ photos – if you’ve met me, you’ll know what my eye looked like but it’s distinctly unappealing in close-up, so if you’re the least squeamish, don’t click on the jump.

*I’d forgotten this, BW reminded me

Update – I’ve just taken off the eyepatch and it isn’t too bad, so I’ll add that photo here. 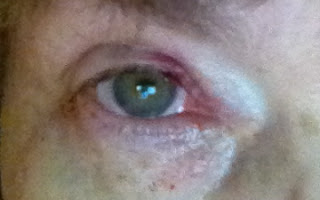 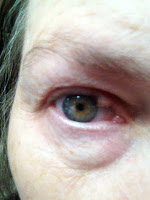 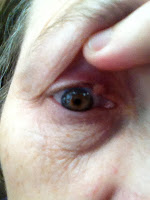