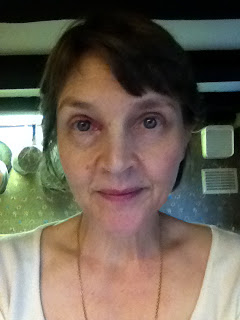 Here I am, make-up-less and – actually, I could have done something with my hair, couldn’t I?  No matter.  My eye does look a bit pouchy in the photo, something I hadn’t noticed in the mirror.  However, the swelling has gone down, it’s just a bit red and no one seems to have noticed all day, or maybe they’re just too tactful to mention that I look as if I’ve been in a bit of a dust-up.  You should see the other fellow, darlings.

I feel so much brighter of eye, though.  It’s made me realise that my brain must have been disregarding the obstruction to my vision – that is, I didn’t consciously see the mole but it must have been blocking the corner from my sight because there’s a difference now, even without glasses on.  I keep putting the damn things down and losing them, though.  I can’t read with them on or prepare food, nothing close to.

So, enough about that, end of story.  From tomorrow, I’ll tell you a bit about my mother.  I’m afraid there are no early photos of her though.  Hardly anything from her childhood was kept – her grandmother’s glove box and portrait (which I don’t really know what to do with) and that’s it.  Her father, when he was losing his sight, decided to burn all photos and memorabilia, which was a great pity.  So the portrait will be painted in words.  As I said the other day, I have written about her before so it’ll be based on posts from six years ago.  Only a few of you will have read them and fewer remember them, so I hope that you will excuse me as Blue Witch has kindly done.