I’m going to have to stump up for the https thingy, I suspect.  It’s a nuisance and this is already a secure website, but most search engines insist on it, or will do soon.  Apologies if you’re getting warnings that I’m dangerous, I’m not.

Today, I’ve mostly been weeding the vegetable garden.  It’s been a month or so since I did any weeding, I’ve no one to blame but myself, but it’s a bit of a tedious job.  Still a couple of beds to do, but the most easily swamped plants are no longer surrounded by unwanted stuff.  We had the first courgette with dinner tonight – of course, in a couple of weeks we’ll be desperate to give the surplus away, but the first few are a great treat.  Globe artichokes will be ready by the weekend, a couple of weeks later than last year.  I noticed a lot of wild strawberries, self-seeded for several years in the bed by the wall, but usually the birds get them.  I must pick some tomorrow.  So delicious.

RasPutin the tomcat, father of the barn cats, disappeared for several weeks and turned up again yesterday morning, looking very thin.  All the same, he turned up his nose at Whiskas and pushed his son away from the remains of Eloise cat’s food.  I take her leavings from the day before to augment their breakfast.  I’ve got a pouch of her food down there, in case he turns up hungry, which is stupid of me but I can’t help being soft.

Update on the footpath thingy – I’ve now had a letter from the guy who was on my doorstep, apologising for the imposition of turning up unannounced (with my name thoroughly misspelled) and asking formally that I will consider a permissive route across my land.  I sat on it for over a week while I thought about it.  In the wee small hours, I drafted various replies, most of them very long-winded and detailed, but I wrote back fairly simply saying that I did not accept that the footpath should be diverted at all and that I had not been given enough information to … actually, I’ll quote it.  Here’s the very note, this is what I wrote:-

I received your letter asking for a permissive footpath across my land and will explain the aspect of you and your colleague’s visit that I was not happy about: that no notice was given of your “big ask,” as you put it, and that you did not clearly explain the circumstances around NCC’s wish not to repair the footbridge, nor what options had been considered.

The current path is a public right of way and, if it were on my land, I would be expected to keep it in good repair.  It has always been in regular use and, even after the bridge collapsed, it was still used until you blocked it with a gate this spring.

Closing or diverting a public footpath is a legal process and consultation is required before it can be considered.  The NCC website states that there is a temporary diversion in place and that repair work may last for several months: there is no suggestion there that you wish to close or permanently divert the footpath.  I have no reason to accept, at this stage, that permanent closure is necessary, as your letter gives no information at all. 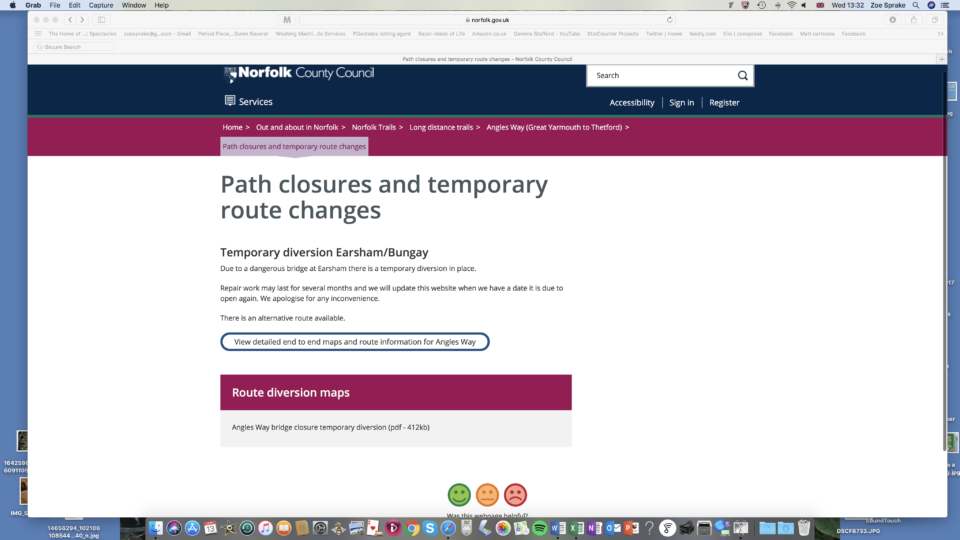 This is the screenshot from the NCC website, which I took in case they change it.  I feel that I’m being set up.  If they apply for a diversion, having persuaded me to allow it, the villagers will blame me for facilitating it, but if the whole thing is closed, the council will make sure it’s known I refused a diversion.  The whole thing smells bad.  I have been told that, although the Environment Agency wants absurdly big foundations, a temporary scaffold bridge does not hold that requirement.  Although temporary, it can last for years.  I still don’t see how foundations for a footbridge can be said to cost more than the building of a house.  But I haven’t gone into that in my letter, I’ve swatted the ball back into their court.

The electricity here is now guaranteed up-to-date.  I haz a sustificate and everything.  I asked him to look at the annexe fuse board and that needs replacing too.  Jolly good job I’m a pensioner now and so can afford all these luxuries.