We drove 150 miles for lunch today.  And great fun it was too.  Ro came over first thing and we all set off together, meringues and mousse in the car.  We made very good time, less than three hours each way, though I was tired by the time I arrived home, having done all the driving (neither the Sage nor Ro is insured to drive my car).

Ro hadn’t been to Daphne’s house for some years and I sent him to look for himself among the photos in the downstairs loo.  It took him a while to identify himself – he’s the little blond on the left.  Al is standing next, then G (Daphne’s son, who is getting married in a fortnight), then G’s brother J, and the Sage is almost hidden in the foliage.  It was evidently taken the last time the summerhouse was dismantled, something that is due to happen again. 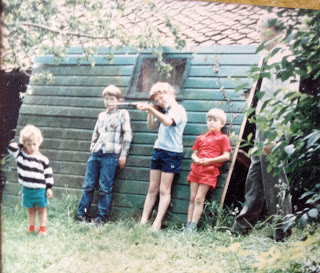 When we got home, Ro went for a bath (the boiler has packed in at his house and a new one will be fitted next week).  I had supper ready when he came down and then the Sage took him to admire the four youngest chicks, who are living with their mother in a coop in the biggest greenhouse. 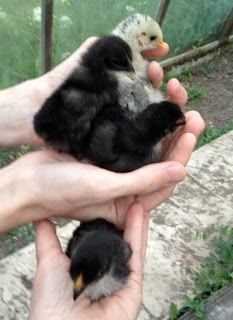 Immediately after this picture was taken, one of the chicks crapped spectacularly into his hand.  Ro squealed a bit but didn’t drop a bird of course, and I removed them from his grasp to put them back under the mother hen’s wing.  He had a messy puddle in his hand, which was most amusing.