Seeing the family is happening in stages, though we always get together, usually here, sooner or later.  The latest one Christmastime was 31st January.  There are still a couple of bags of presents to give out tomorrow, when Wink arrives and then Al and co drop in during the afternoon.

LT and I have mostly been enjoying our second Christmas together and the first here.  I’m getting more mobile by the day and now can walk without a stick and with very little limp, though I usually use a stick.  I’ll have to be careful about bending and twisting for another few weeks and won’t drive for another four weeks – actually, I’d probably be fine in another week or so, but the insurance company would require the all-clear and I’m not due to see the consultant until the 26th January.  I’m happy to rely on LT and he’s happy to drive me, so that’s no problem.

My only difficulty is sleeping at night and it’s not unexpected.  I have to sleep on my back and it’s not really that comfortable, despite lots of pillows and a cushion under my knee.  Last time round, my hip was so bad that I woke in great pain several times in the night and, unable to move, had to haul the edge of the mattress to pull myself over to a new position before I could sleep again.  Although I sometimes was woken by pain, I hadn’t been as bad as that this time, so there hasn’t been the contrast – that was my theory beforehand and it seems to be the case,  But no grumbles.  I’m considerably better in every other way than before the operation and it’s going to improve all the time.

Little Rusty Rufus the Red, youngest grandbaby, is a darling little boy with quite a personality already.  His face is full of expression – of all the other five, he reminds me most of Gus, whose humorous expression seemed to share a joke from the first day of his life.  And Rufus’s gorgeous deep, dark brown eyes are just melting.  His parents both have wonderful brown eyes and I think his might be the darkest of all. 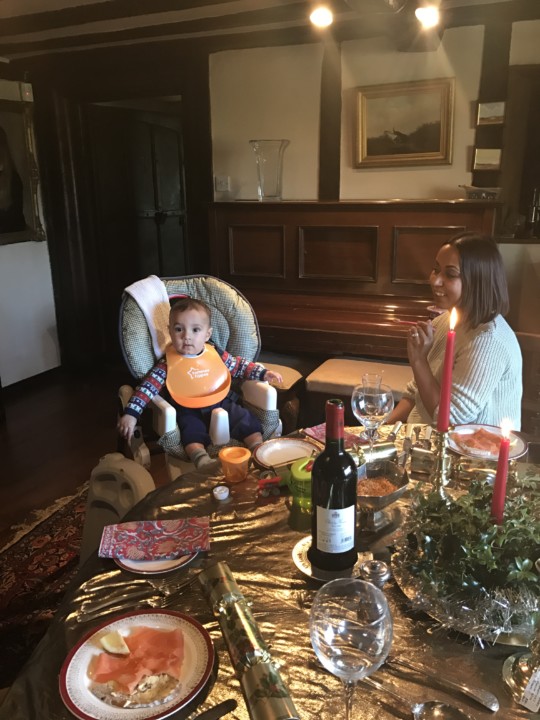 Here he is, about to have his lunch.  Cloth of purest bling, you see. 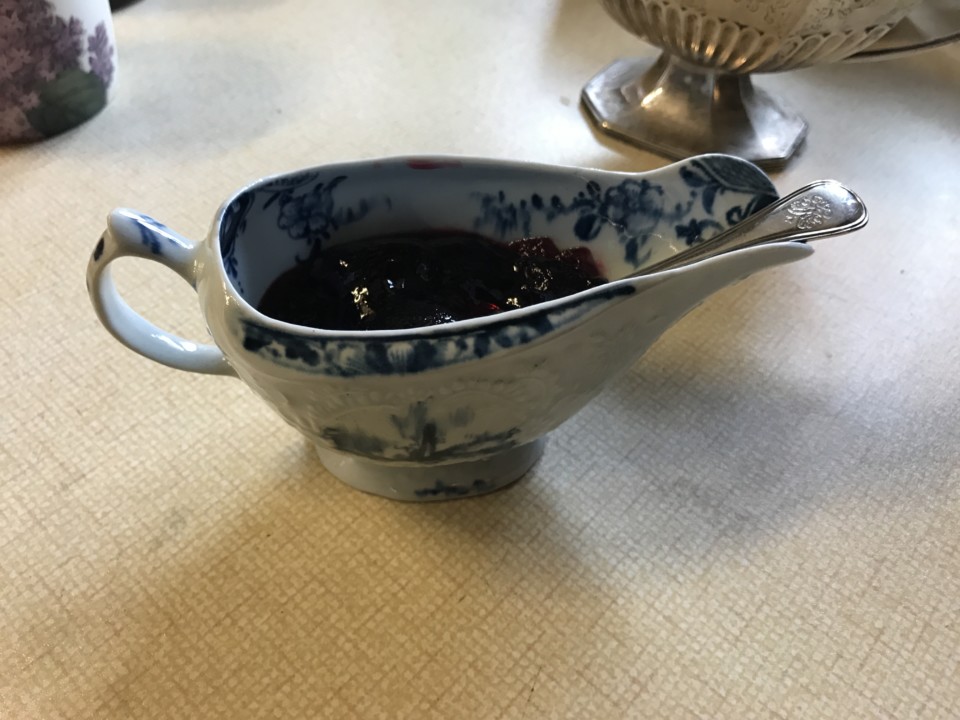 And here is the Lowestoft sauceboat that I used to serve the redcurrant jelly to go with our wild duck. I bought it in the auction in October – it attracted me because of its earliness. It’s not one of the very early, pre-1760 pieces, but it’s certainly pre-1765, in lovely condition and, though nothing remarkable, I just liked it. And it gives me great pleasure to have used it for its original purpose, probably for the first time in at least two centuries.

I know the age because of the bluish glaze and the details of the painting, not all of which you can see.  But that trail of flowers near the lip – that’s early Lowestoft.  And there’s a lovely flower inside the base that is too.  And there’s something about the lip and the overall shape – I could show you by comparing with a later piece more easiIy.  I can’t imagine the skill of painting it in such an awkward place.  Very talented workpeople (men, women and children) there were.   A provincial factory, not the finest china like Chelsea or Meissen, but it has great charm, I think.

5 comments on “Z catches up”