I done a lol (copyright Vicus, I believe, whom I acknowledge with thanks) when I read the comments in Liz’s post about her hamless sandwich.  It reminded me of a story my mother told, when she was a young woman in the Land Army.  Most of the farm workers were called up, and the farmers, who were two brothers, some once-retired men and the Land Girls worked the farm.  One day, they all sat down in the harvest field together to eat their packed lunches (my mother lodged with the farmers and their mother so Mother did the pack-ups) and someone noticed Old Bob gloomily peering between two slices of bread.  “What you got for dinner, Bob?” he asked.  “Piece of bread cut with a hammy knife,” he replied.  Which expression, of course, entered family folklore.

Expressions do, don’t they? Sometimes, it’s something that’s said that strikes someone as funny, sometimes it’s a misused or mispronounced word, especially by a child – if the last of these, you have to be careful where you say it, as outside the family circle it looks as if you don’t know how to say it.

In particular, we use expressions that refer back to old friends of my mother’s, who lived in Wrentham (really can’t be doing with putting that backwards) when she did.  Jimmy and Ruby.  Ruby loved to come up behind you, put her hands on your waist and give a tickle.  I loathed it, I have to say, and she finally stopped doing it when, overwrought one day, I cried.  Yes, I was nearer 40 than 30, but it just got too much.  Anyway, now, a little tickle is called Rubying.

Jimmy boasts two expressions, one bearing his name.  If asked a question that involved some checking – for example, the time, if there was a car outside, who was at the door, he’d offer to take a look-see.  So this became a Jimmy-look-see, shortened to Jim.  We all say it – ‘I’ll just go and have a jim, I’ll let you know.”

He also rather loved home-spun philosophy, and would treat the most trite expression as worthy of great respect, especially when uttered by my mother, of whom he was very fond.  Whatever she said, he would ponder for a while and reply, simply but meaningfully, “Yes, Jane.’  So, if you ever tell me something pretty obvious or come out with a cliché (not that my mum often did, but the expression exaggerates for effect), expect me to say, with just a hint of sarcasm, “Yes, Jane.”

Terribly tempting to come back to family sayings, I probably will before long.

It’s only fair to give you a picture of Jimmy and Ruby, in celebratory mood. 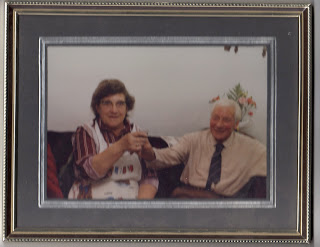