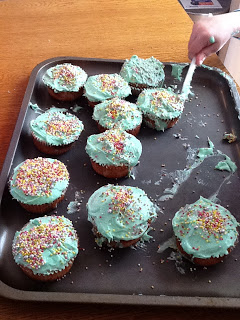 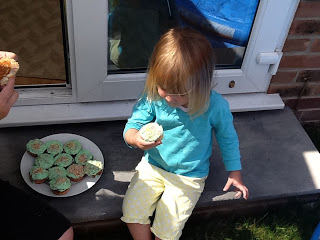 I apologise for the unseemly amount of leg on display; I wasn’t wearing that short a skirt but it seems to have gone for a ride.  Weeza’s sitting room floor is not on the huh, it’s the way she took the photo.  And Zerlina was allowed a dummy, which she normally only has in bed, because we thought she still might have a short nap – she didn’t.

I’m also reposting a picture of the figs I picked from our tree a few years ago, I think it would have been in September.  I probably ate nearly all of them myself in two or three days.  I like fresh figs.

I’ve been debating with Dave, in the comment box, whether it is a greater show of self-discipline to refuse a cupcake altogether or to accept it but leave the icing, assuming you like icing.  For me, it would be the latter (although not in the case of a cake, because I am not bothered about icing, not having a very sweet tooth).

I have no difficulty with leaving food on my plate; once I’m full I am unable to eat more.  If that means that food is wasted I can’t help that; eating food I don’t want would still be wasting the food, it’s just treating my stomach as a dustbin.  I’d rather not do that.  But leaving something that is both tasty and moreish, that I could manage, is not that easy.  I can refuse chocolate, leave it unstarted or eat a single chocolate (from a box or a square broken from a block).  But eating half a Crunchie/Mars/similar ‘one serving’ bar, I find extremely difficult, even though I’m not very fond of them – too sweet, and I prefer dark chocolate anyway.  I can cut it in half, share it and not miss the uneaten part, but breaking it in two, eating some and leaving the rest is a real test of willpower for me.

I only ate one cupcake, by the way.  Weeza said she had one of them for breakfast this morning – she recommends.  I have suggested that Zerlina come to stay on Friday for the weekend.  I thought we could make sausage rolls, with jam tarts from the pastry trimmings, perhaps.