The bus trip wasn’t brilliant, to be honest.  It was quite interesting, but Maja and Marina sensibly cut things short after lunch.  Wink and I didn’t, and wished we had when we discovered we had to walk a kilometre to an ashram (and another one back again) in the heat of the day when we’d already walked a lot.  We opted to stay on the bus.  Or rather I did, I read, Wink went and talked to a group of children playing cricket. 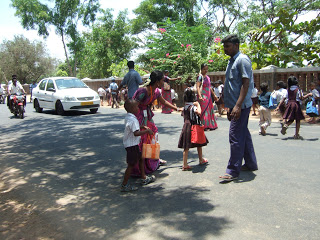 An entertaining moment was when we were by a lake.  A group of schoolchildren were just leaving as we arrived.  They were adorable, but that isn’t the entertaining bit.  Someone was watering the shrubs from a hosepipe, and after a while he realised that no more water was coming out.  Another man carefully unkinked the hose, but it didn’t help.

You might notice from this picture what the problem actually was. 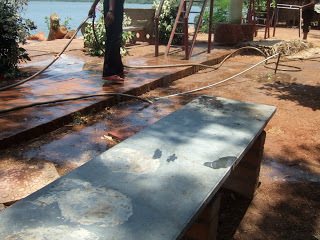 It was even better when they tried to rejoin the two lengths of hose and water sprayed everywhere. 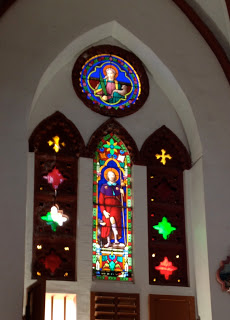 We went to another church, where there was a window depicting a saint whose name I’ve forgotten, but who was rather petulantly showing us a graze on his knee.  Marina recognised him, apparently he was rather badly wounded but his dog licked his injuries which miraculously healed at once.  Presumably, the sore knee was the final hurt that the dog hadn’t licked yet, but the flirty yet indignant display of knee was highly entertaining.