After the Hindu wedding celebrations were over, most of us headed off in various directions for a few days before we were due to convene in Vallore for the Christian ceremony.  Wink and I were going to Pondicherry.  We went with Maja and Marina and left them to visit the Shore Temple in Mahabalapuram (I should have checked the spelling of that, it’s not way out) before finishing the journey.

I took several snaps from our hotel bedroom but not one of the sea view, a few hundred metres away.  This view, however, shows what an Indian building site looks like. 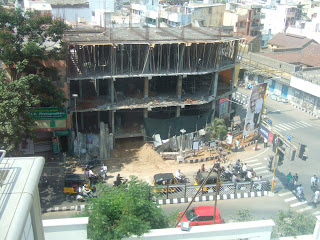 It isn’t really quite indicative because they’re just being used as supports, but those precarious twigs, when lashed together, comprise scaffolding in India.  It’s remarkable.  They don’t look as if they’d support anything at all, but I’ve seen it over and again in the past.  And another thing, it’s women who do the labouring.  Men are the builders, but women fetch and carry and do the heavy work.

Wink and I walked down the road towards the sea.  There’s not exactly a beach. 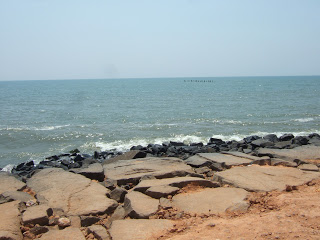 The statue of Gandhi provided welcome shade for a couple of men and several dogs who slept underneath. 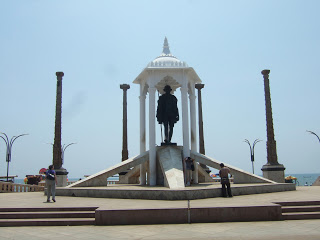 That Pondicherry was part of France right through and beyond the days of the British Raj was apparent in the street names and in some other bilingual signs. 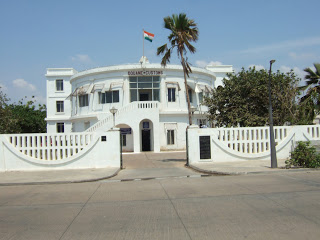 It was hot and the sun was strong.  I wore my big floppy hat, or I’d have been in trouble, but Wink is quite impervious to the sun’s rays.  However, we were both pleased when our destination, the tourist office, became visible. 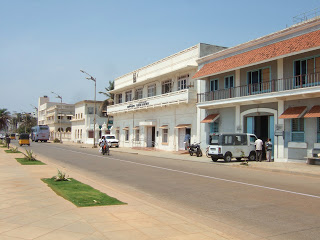 A rather charming touch was that there were two clocks in the office, one giving Indian time and the other giving French time.  It was wrong as it happens, because it hadn’t been adjusted for European summer time, but no matter. 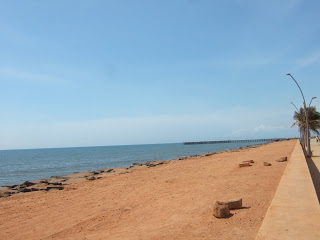 The beach opposite the tourist office.

We found out that there was a tourist bus daily doing tours of temples and so on in and around the city. So we decided that we’d have our massage and pedicure and do the tour the day after.

On the second evening, we tried out the rooftop restaurant.  We liked it very much.  It was quite breezy up there, but that meant that it wasn’t too hot.  We looked out over the lights of the city. 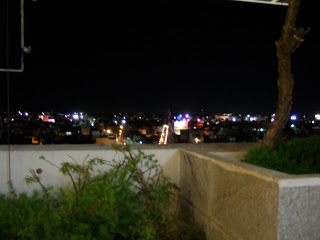