While I’m still in a photo mood, here’s one of old RasPutin, the father of the barn cats. 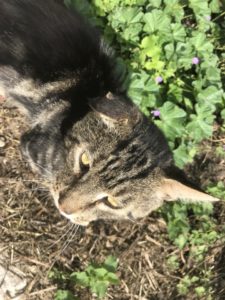 He vanished a while ago for some time and, when he came back, he was very thin and so was his coat.  I’m not sure if enlarging the photo will show, but he is half the cat he used to be.  When I stroke him, I can feel his ribs and his hair isn’t patchy, just really thin overall.

I feed him three times a day now, if he’s about, and he eats well but he isn’t putting on weight.  I don’t know if he simply has worms, or if it’s cancer, but at least he’s happy now.  A few weeks ago, he was very anxious and begged for food but now he loves to be stroked and is willing to wait to be fed, as long as I’m making a fuss of him.  I don’t honestly expect him to last the winter and I daresay he just won’t turn up one day and I’ll never know what’s happened, but at least he will have been comfortable.  He used to turn up when he felt like it, but now he’s always about.  And he purrs now, which he never used to do.

He and Rummy have come to some sort of accommodation.  He’s still the top cat, actually and Rummy doesn’t mess with him – he’s been whopped too often.  RasPutin has lost fights, as shown by his torn and crooked right ear, but he still has stature.  His children are fond of him, especially his daughter Betty.

I gave up and now buy Whiskas.  You knew I would.  The five of them eat up to three tins a day.  It costs a fortune.  *Sigh* At that, Betty often turns her nose up and just eats the dried GoKat.  She approves of Eloise cat’s left over food though.

I can do nothing about it.  If being kind turns me into crazy cat woman, so be it.

Frustratingly, I don’t know if the chickens have mastered the new feeder or not.  I put down a bit of food for them under it, because I worry too much to leave them unfed.  Little Yvette, the Serama, seems to get chased away, but she’s being a bit broody anyway and spends most of her time in the nest box.  Interestingly, the big brown hen is also somewhat broody and they are nestled down together – since BBH normally bullies Yvette (who is a feisty little thing and isn’t cowed, though she has to run away as she’s so small) it’s surprising that they are nestbox partners, but that’s that.  The black hens are laying and those two are sitting.  Anyway, though I’m not entirely satisfied by the feeder, which is wildly overpriced for what it is, not having trays of food down does, as Blue Witch predicted, seem to have solved the rat problem.  They don’t come in and scuttle away when I go in the greenhouse.  I’ve been thinking about it – Russell never used feeders or drinkers, but put down bowls of water and scattered them handfuls of feed several times a day.  They were free range outdoors then, of course, unless the weather was too bad – but we never had a rat problem.It may be that the chooks are using the feeder – in a day or two, I’ll not put food down in the morning and watch them.  I’ve been a bit too busy for that, so far.