My parents bought all their furniture at auctions in Dorset when they were first married and had no spare money at all.  They ran the hotel but took no wages and it was barely profitable – the price you could charge for meals was restricted in times of rationing after the war and, although they made money in the summer, it was mostly drained away during the winter.  My mother used to say that she put down £2 a week for flowers and picked them from the garden instead, and that was the only money she had, although they lived ‘free’ at the hotel, with a flat and all food provided.  This was no cheat, it was their hotel, originally belonging to my grandfather until he gave it to them on their marriage.
This was the money she used to furnish the flat.  At that time, as now, Victorian furniture was thoroughly out of fashion and it was worth very little.  So you could pick up good, solid stuff for a few pounds.  Her lovely, elegant four-poster bed cost £8, for instance.  One of the pieces was a revolving bookcase, an attractive one inlaid with satinwood with a central shell motif (you can tell I’m gearing up to write a sale catalogue, can’t you?)  I was always very fond of that as a child, though not allowed to revolve it because she liked to keep the furniture in the same place and the wrong books would be at the front – later, when we had a portable television rather than a large one, it stood on top of the bookcase so it couldn’t be turned then because of the wires.
I wrote in a post before Christmas that the Sage is often fairly rubbish at buying presents but that occasionally he came up trumps, and one year he bought me a revolving bookcase which, if you’ve been in my drawing room, you’ll have seen.  I was very pleased – it’s not as pretty as my mother’s, but I like it all the same and it’s extremely useful.
A couple of weeks ago, he came in saying he’d got a birthday present for Weeza – you’ve guessed it, the third revolving bookcase in the family (my sister now has the family one).  She was slightly surprised, I think, but the more she thought about it, the more pleased she was, not only because it’s a nice one but because she was so touched to think that he went out and found it for her.  Present-buying is usually left to me.
I did go and buy her some presents in fact, more for Zerlina and Gus’s sakes than anything, so that there would be PRESENTS! to open.  I bought lots, eight of so, of little things, some handcream, jars of nice food, sweets and chocolate, just odds and ends.  And after lunch, z and I made cakes.  Cupcakes are a lot bigger than proper fairy cakes, aren’t they?  But at least they don’t occupy the oven, tray after tray, for ages.  And then we decorated them, of course.  And you want pictures, innit?  Okay, I’ll add them later – sorry, just noticed the time and must go and start on dinner.

Well, the pictures were remarkably similar, each to the next, so just one – 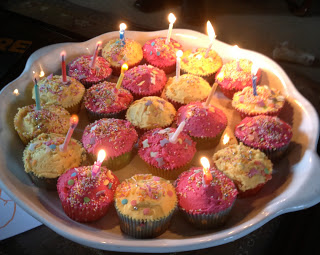 Enough candles to give a sense of occasion, but who, after leaving their teens, needs the exact number?