I make no attempt to disguise it: the Sage and I are no end pleased and flattered that you want to come to our party.  You are all most welcome – it’s you lovely people who make it fun, we just provide the venue – and a lot of food.

Today was a bit frustrating.  I went to a lecture on Freud (the artist, not his grandad) and Hockney and then trotted along to Jarrolds to do a bit of shopping.  I wanted some new boots because my long ones’ zip had broken (that is, two boots, one broken zip).  I tried on a lot and eventually bought these* (no pic posting problems on Safari, though I understand those unfortunates who still use IE have to go round the houses) though they weren’t exactly what I’d been looking for, but were gratifyingly well reduced in price, fit perfectly and – well, I need new boots. 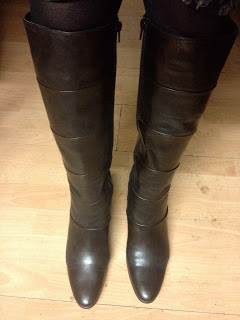 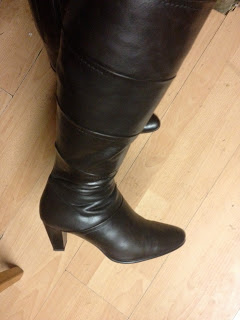 It started snowing while I was in the shop and by the time I’d finished I was only five minutes short of that hour’s deadline in the car park, so I didn’t buy the books I’d planned to (book token for Christmas!) and headed back.

Darlings, I soon discovered that there was a problem.  Everyone was leaving Norwich early because of the snow, and Grapes Hill was closed – it appears to have been a scheduled closer, presumably because of roadworks and no one was undaft enough to open it again.  I ended up several miles in the wrong direction on the ring road, my least favourite road in the world (and I’ve spent hours stuck on the M25 and various other motorways) and I finally arrived home at 6.06 pm after a journey starting at 1.25 which should have taken half an hour.

But I am a positive and uncomplaining Z on the whole, and I took time to notice how pretty the trees were 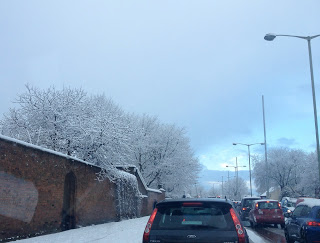 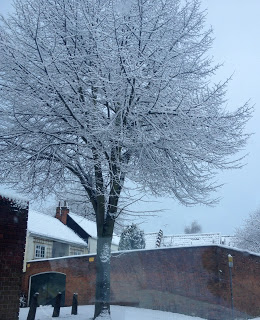 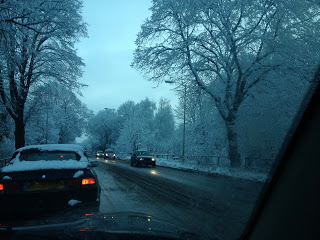 I was, of course, stationary at the time I took the photos, as I was quite a lot of the time.

I also observed, as so often before, how lovely people are.  No one lost their temper, no one hooted a horn, even when someone was blocked from going ahead by a car that had space to move a bit and leave room, people paused to let someone in front or out of a junction.  I stopped to let three young women and an older one cross the road – the ice was treacherous and the older one fell and the others hurried back to help her up and walked on arm in arm.  Lorries lost traction, but fortunately everyone took great care and I saw no accidents, which was remarkable.

Have to say, though, what a stupid situation.  I’ve no idea what (apart from not shutting Grapes Hill) could have been done, because sending traffic control police out would have been a danger to them.  I have no plans to go far for the next few days until the very English winter weather eases.

*Looks like fat calves and tiny feet.  Neither is true – put it down to foreshortening