It occurs to me that *of course* you’ll want to know about our latest project.  Our drive is 100 metres or so long, or maybe 100 yards, I haven’t measured, and then it forks around the small lawn, meeting up in a wider area by the two houses and several outbuildings.  This latter area is gravelled and the rest covered with tarmac (whilst there may be no nouns that can’t be verbed, I couldn’t decide on the correct spelling of the past tense of ‘to tarmac’).  It is at least 40 years since this was last top-dressed, and for the past 25 has had a Calor Gas lorry driving on it regularly, which is slightly wider than the present drive.  Then there are tree roots that have lifted it in places, and we agreed last summer that we needed to get it redone.  The heavy frosts of last winter were the clincher.

Whilst we’re about it, we’ll widen it a bit.  Partly to make it better for larger vehicles and partly because we’ve got absurdly little parking, considering the space there is. A few years ago, I tackled a very overgrown hedge around the lawn and took out a lot of it, including a very thick, tall laurel hedge and some long-dead hawthorn which was surrounded by scrubby lilac – I was sorry to lose the lilac, but there was more on the South side of the lawn.  The plan had been to incorporate these areas into the lawn, but grass has never had a chance to grow because the chickens scratch it out.  So, instead, we’re incorporating those parts into the gravelled area.

Jamie, our new gardener, has a nephew and a brother-in-law (not father and son) who will do the job, each having their own business.  The first part is to clear the edges of the drive ready for widening.  Then we need a foundation for the gravel or tarmac to go on.  We are putting in edging so that the grass doesn’t come back on to the drive.

The end of the drive is also an issue, where it meets the road.  There is a drain with a soakaway, but there used to be three flowering cherries, which the Sage’s parents put in to commemorate their 40th wedding anniversary in 1967.  Over the years, the roots grew into and cracked the drain, and also the soakaway didn’t have a trap for debris to fall into, so it’s always easily blocked.  The trees are gone for some years – one died and the others were not going to be far behind.  That will all have to be dealt with at the same time.

At the end, of course, Alan will come along to do the top dressing of tar and chippings and we’ll have some deliveries of gravel to tidy up at the house end.  It mustn’t be too deep or it’ll be awkward for Dilly to push the pram on.

Here are a few pictures.  The rough grass at the base of the wall is going to be a flower bed.  There had been an umbrella pine which was cut down a while ago and now we’re digging the stump out.  The final photo shows where the gas tanker has encroached on the verge and broken up the tarmac. 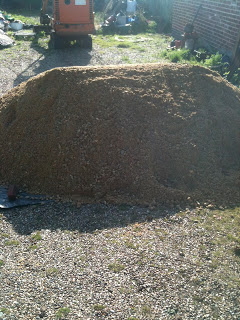 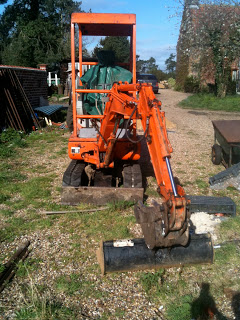 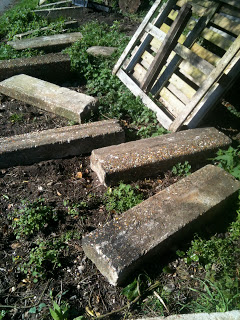 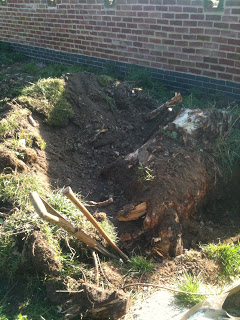 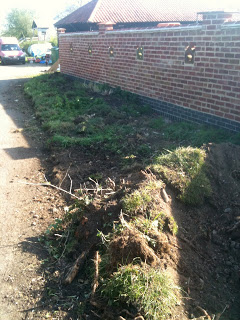 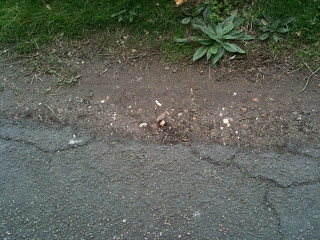