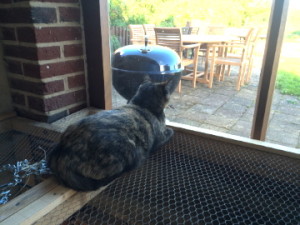 I really should take photos in better light.  Still, you get Eloise sitting on the tortoise run, looking out at my new garden furniture in the bright sunshine.

Mike left a comment about a comment I’d left on his blog, which reminded me of one of my favourite websites.  Simon Knott, quite some years ago, started a website about Suffolk churches.  It’s entertainingly written, but there’s real research and knowledge there too.  Some years ago, he visited my village church and left a comment in the visitors’ book, thanking us for leaving the church open.  I was churchwarden at the time and excitedly left an appreciative comment on his website.  He usually arrived, in those early days anyway, on his bike and wearing casual clothes, with the result that some clergymen were a bit sniffy about him, which he also referred to entertainingly.  As the years have gone by, he’s extended his visits to Norfolk and Essex.  To give you a flavour, here is his entry on my village church.

I’ve finally admitted that I’ve given the kittens names.  I’ve stopped referring to the mother as a feral cat for a while, because I don’t believe that she started that way.  I haven’t really named her, though – that is, I call her Cat after the cat in Breakfast at Tiffany’s, though Roses calls her Mama Cass.  Because I call them barn cats, I named the two black cats Barney.  I can’t tell them apart, so there isn’t much point in giving them each a name.  In the same theme, I’ve called their sister Betty, because she’s dark haired and pretty.  The tabby cat has been called Zain, because I’d promised Ro’s friend (and Best Man) that, if I ever had a cat, I’d call it after him.  Eloise arrived already named, but the tabby is charming and friendly, so he’s worth the name.

The sun was shining brightly and they were in the shadow of the Dutch barn where I feed them, so I had to tweak the contrast quite a lot to have them show at all.  Cat was not there at the time, she arrived a minute later.  I’ll show you a picture of her another time.  She’s very like her daughter, except that she has green eyes. 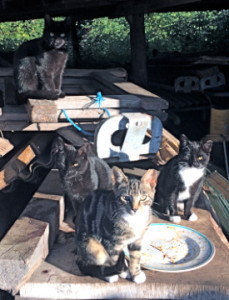 8 comments on “Cats and churches”