The Sage suggested that Dave work on the next pillar today while I built up the straight bit of wall. It was a beautiful day, hot and sunny but with a cooling breeze, so it was very pleasant to work outside. We all wore hats and sunscreen, in case you are feeling concerned and protective of our well-being.

I’ve said that I don’t weed and, indeed, it was not I who pulled up this bramble from the garden in front of the house. I hope it’s reasonably clear; I took another one with the family holding it up, but it showed faces, so I’m not allowed to post it. 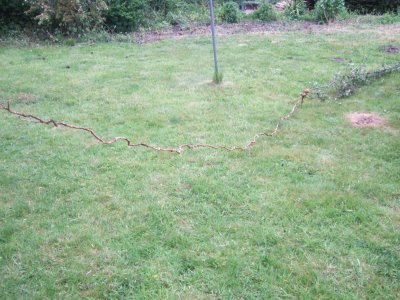 We decided that the umbrella pine tree near the wall would have to come down. We’re very sorry about this – the Sage’s late brother brought back seeds from North Africa 50 or 60 years ago. There are still two left, but most of them have had to be felled as they were getting unsafe. This one wasn’t yet, but it was quite close to the wall. An oak sapling was growing next to it; originally we’d left it to take over when the pine died, but it’s too close to the drive and to the wall, so that came out too.

The photo was taken after a couple of branches were removed.

Not much left now. 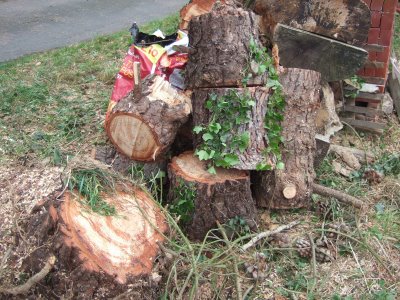 And this is the result of today’s labours. We put in a short morning today as the Sage, Weeza and I had work to do this afternoon, so we didn’t add a great deal, but now it’s a definite wall and, with the beginning of another pillar, there’s a defined future gateway.

The next few photos are a sort of flip-book. If you look from one to the next very quickly, you’ll almost see the movement of Dave’s hands as he expertly laid the final brick of the day. 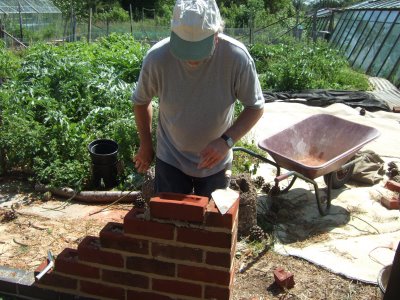 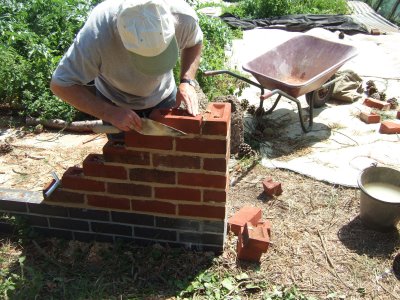 You’ll notice that he is smiling. We’re still all having fun.