Again, a bit of a red-letter day.  It was dull and there was a misty drizzle when we started work, but not so much as to stop us.  It wasn’t cold, either, though we didn’t bother with the sun cream.

We accomplished what we’d hoped to, which was to finish the lower half of the side to the right of the pillar, and level off the other side.  Next, Dave will be inserting the ornamental bricks and we’ll have to decide the final height of the last section – the ground drops away, so if we make it level with the rest, it will, effectively be higher on the outside.  So we may do a step down.  We don’t have to decide immediately, but we will have to soon.

We may manage another day’s work next week, but that’s up to the Sage.  It’s the auction on Friday and he has to be well rested, and he’ll have a busy week, so it’ll be one day at most.   Here are today’s wall photos. 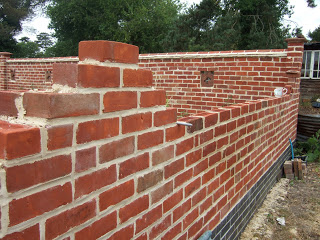 This is the section that Dave filled in.

And this is the bit that I did, except that Dave did the last three bricks plus a bit more pillar when I had to hurry off to do Meals on Wheels. 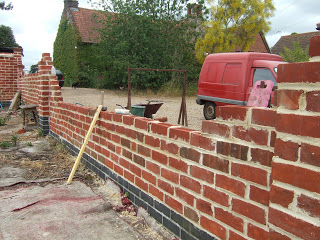 The wall from the kitchen garden side.

During the morning, the Sage heard a partridge cheeping to its young, and found that the mother bird who had raised a brood in my overgrown herb garden in the spring was tenderly caring for another batch of chicks.  I took a couple of photos, but they aren’t clear at all, as the birds are so well camouflaged and it’s really not worth showing them to you.  However, later on he surprised them just by the wall – the mother hurried into the kitchen garden and called to them to follow her.  The wall was in the way, so several were at a disadvantage.

This little one, if you can spot it, found the shortest way to mum. 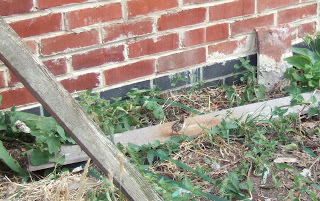 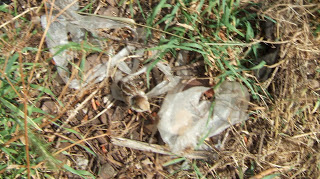 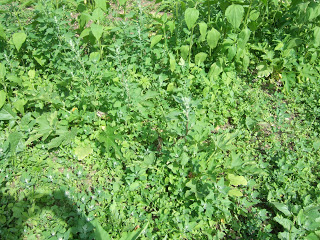 This one took the scenic route.  It was listening all the time to the sweet cheeping of its mother.  I thought I’d taken a video of the final dash across the kitchen garden, but in my haste I’d not put the camera on the right setting.  The whole family was reunited in the end, and now they’re shut in the veg garden – there’s plenty of cover and food for them so they’ll be safe there.  I do love to have all our wildlife around, including the snakes and frogs and other creatures I rarely see.
By the way, if you live around here, the Sage and the mug in the sale 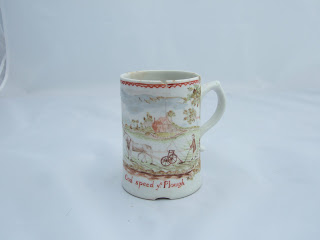 which is this wonderful little darling (sorry, it’s the pre-cropped version, so the edge is in there) will be in the E@stern D@1ly Press, the excellent Norfolk and North Suffolk daily paper, tomorrow.  Unless something exciting happens, when it’ll be another day.  I assured the photographer that we’d see it whenever, as we take it every day anyway, and he thanked me which was rather sweet.  Amy came to interview him, but I was out then.
I know the mug is cracked and chipped, but it doesn’t matter.  So am I, and I’m not 240 years old.  It is delightful and beautifully painted, and there is none other like it.  It’s a one-off, specially commissioned.
I spent the later part of the afternoon and the evening baking for the weekend’s festival.  I unwisely wore high heels while standing for several hours and now I just want to sit.  However, I’ll have to get up early tomorrow to do the icing.  And then there will be scones to make – you have to give something for people with diabetes to eat, so I’ll do cheese scones as well as those to eat with jam.  I cater for everyone, as there were a lot of foods my mother was, in her last years, unable to eat.  It made me aware of allergies, intolerances and preferences and I think it’s all part of caring for people, that they shouldn’t have to feel different just because of something they can’t help.
Dave had sausages and pizza for lunch today, by the way.  I am looking after him, you see.