I think that few rabbits would be able to jump the wall now.  So at last, my french beans may be able to start growing.

We didn’t do any bricklaying at all last week.  We were all very busy and all spent a lot of time in the sun, and extra mornings with the sun beating down on us were not going to do us any good.  This is still meant to be fun, not a chore.

Today, however, not only did I build the final section up to beyond-rabbit height, but Dave built some of the section next to it to just below the ornamental brick height. 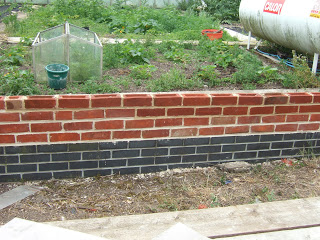 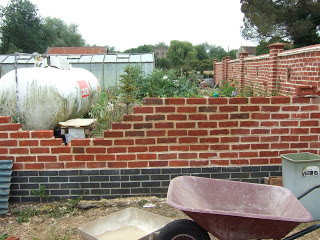 And this is what Dave did. 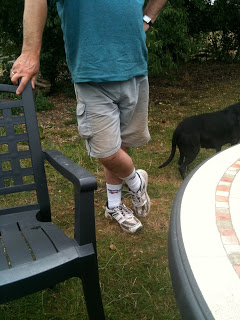 I seem to remember promising a picture of Dave in his shorts, but I forgot when he was working, so here are the Lovely Legs of Dave, snapped unbeknownst to him, after lunch. 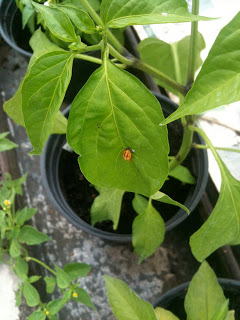 The other picture I took this morning is a pupating ladybird in the greenhouse.  Did you know they are buttercup yellow and spotless when they first emerge?  There were a lot of little pollen beetles in the garden today – Dave got out a ball of yellow string and they landed on it, hoping for food.  They were also all over the pumpkin flowers.  We all put on sun cream with insect repellent, so that we wouldn’t be bothered by them ourselves, which mostly seemed to work.

Dave said “surprise me with a fry-up” when I asked him what he’d like for lunch.  So, we had bacon, scrambled eggs, chips, toast, home-grown tomatoes (the eggs were home-grown too, of course) and, as the surprise, fish fingers.  I offered ketchup, but Dave said that his mum didn’t let him eat ketchup.

I expect that Dave has noticed that he’s getting slightly more interesting lunches this year.  Last summer, it was nearly always bread and cheese.  It’s still simple food now, but at least there’s a bit more thought going into it.  It is only now that I realise how, for the last year or two, everything was such an effort and now I’m more mobile and out of pain, I’ve got a lot more energy and enthusiasm.

The comment problem seems to be widespread, but Blogger still haven’t referred to it in their ‘known issues’ page.  There are plenty of complaints in the problem forum, however.  Someone has set up a spreadsheet to gather together details and forward them on.  I’m posting now, just in case there is an outage while the problem is dealt with.  I suspect that Blogger don’t know how to put it right at present, as it seems that it has been going on for some time but they’re not reacting to complaints.

I am at least receiving comments in my emails – obviously, I don’t know if I’m getting all of them – so thank you and I’ll post them when I can, if they don’t appear automatically (which they have – so I deleted the post of your comments).