Sorry about last night. I needed to send a couple of emails, but googlemail was playing up mightily and it took ages, and it was impossible to get Blogger to let me write yesterday’s posts. I didn’t have time this morning either, as the day started with a phone call which sent the Sage out across the field and resulting him walking a mile, clutching a pitchfork and driving a black bull, whose ownership he didn’t know, well away from our cows. He phoned one farmer, but this chap, though charming in person, resolutely never answers his phone – so the Sage put the bull in his field of heifers anyway (it probably does belong to him). One shaggy Highland-type cow had settled herself on our field, so we’ve left her there .

Meantime, I was babysitting as Al had to go out early and Dilly leaves for school at 6.45. Then I had Pugsley all day, so couldn’t get to the computer. Anyway, back to yesterday.

Dave decided to keep going on the pillar one-third of the way down the longest stretch of wall, having sketched it so that he could replicate the pattern twice more in due course. So I built up the brickwork to support it. Probably, this is as far as we’re going with this pillar for now; we’ll next raise the end pillar and the wall in between to the same level and then start to put in the decorative bricks. We’re going to put them in 1 row lower than we did before, so that there’s 3 rows of bricks and then the capping on top.

I wished the Sage a happy birthday, but we’d decided to postpone celebrations until his present, which I was buying from eBay, arrived. He knew about it – I’d found it but needed him to decide if it was suitable for his purpose. He had two to choose from in the end; one was in Cambridge (60 miles away) and the other in Torquay (more than 250 miles) and he chose the latter. The cost of carriage by courier was only £16, however, which I thought was reasonable. I could have paid by PayPal and he’d have it by Friday.

So, imagine my surprise when he casually mentioned that he was driving down – which will, of course, cost considerably more and take an awfully long time. Up to him of course, and soon I was quietly planning what I’d have for dinner the night he was away – I am quite obsessed with food and it can be an opportunity to eat something that’s more of a treat for me than him. He said that the owner could meet him part way – it turned out that meant Honiton, which is still in Devon and still must be 200 miles from here.

Back to the wall – here are yesterday’s pictures –

After Dave had left, I was clearing away the lunch things when the Sage called me to see a moth he’d rescued from a spider’s web. I didn’t know it, so quickly took photos while it was still resting and looked it up. 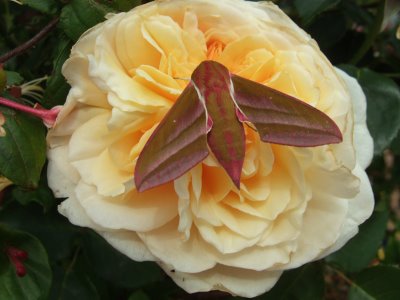 Isn’t it beautiful? It’s an elephant hawk moth. Apparently it’s not uncommon, but I suppose it normally flies at night? – neither of us recognised it. The adult particularly likes honeysuckle nectar; fortunately there’s a sweetly-scented honeysuckle right beside it, and the caterpillar lives usually on rosebay willowherb or lady’s bedstraw both of which are in our fields.

Later, having talked to the vendor of the piece of furniture, they agreed to meet at 4 pm and the Sage rang my sister in Wiltshire to bag a bed for the night. “Just ringing to finalise details,” I heard him say, to her bemusement, as this was the first she’d heard of it. It took me half the evening to get the email to work to let Dave know – by the time I was ready to give up and phone, it was well after 10 pm and he wouldn’t have thanked me for the call. I couldn’t rely on having time to ring or email this morning.