This is the card that I was given by the committee. How well they know me. 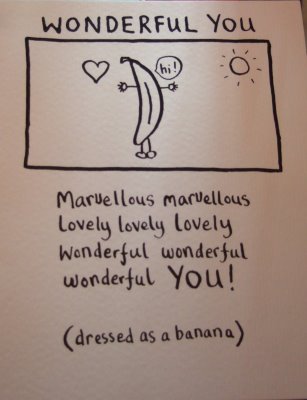 So, all went well although, having got to the last item on the agenda – that is, voting on the new committee; they’d each been proposed and seconded already, and had then been proposed and seconded for election en bloc – it suddenly dawned on me that I hadn’t taken votes on anything else, only proposals. So I did a rapid recap and made everyone raise their hands three times. Fortunately, they resisted any temptation to turn it into a Mexican wave. I’d love to think I’ve brought a pleasing informality to the running of the society, but I’m afraid the most I can hope for is lovable amateurism, and more likely is patient acceptance of mild incompetence.

I’ve been given a generous book token, and now I need to look for books on the arts (this doesn’t have to mean paintings – eg, our talk today was on Saxon churches). Then we went out to lunch, where I wasn’t allowed to pay, and then I came home in time to pick up Squiffany from nursery school.

She had cried every time she was left there since the beginning of term, but last week, after the dentist told her it was time to stop sucking her thumb, her parents set up a star chart to encourage her – she’s the sort of child to respond very well to that. Indeed, she has tried very hard and seems to have broken the habit, although it hasn’t really been put to the test yet. While they were about it, they suggested that other examples of good behaviour (she’d been a bit wilful recently) might be noted, including not crying when left, when everyone knew she likes nursery really. Reader, it worked. I was surprised, last week, when she didn’t look tearful when I left her (as I didn’t know about the chart at the time) and today, when we arrived, one little girl said to another “oh good, here’s Squiffany”. I helped her hang her things up and asked her what she wanted to do while waiting for everyone else to arrive. “I want to play with Megan,” she said cheerfully and I left the three girls in the playground. Normally, she likes to be left with an adult.

I took her to spend some time afterwards in the shop with her father. Al had been slightly frustrated yesterday. It was after 6 o’clock and he was nearly packed up, and the phone rang. It was a customer who’d found a swarm of bees in the garden and was asking him to come and take them away – and he’d have loved to, but he didn’t have time. He had to be at a governors’ meeting at 6.30, so he gave them another beekeeper’s number to contact. He’s been wanting to have a go at taking a swarm, having lost his own.