Oh I say. There’s a thunderstorm, rather close – the latest clap of thunder made Tilly jump off the sofa and she’s normally quite unbothered by loud noises – and it’s raining torrentially (just as the forecast said, unusually), and the Sage is out on the Common in an open trailer. He’s a Common Reeve, you see, and it’s the evening for the official Annual Inspection. He’d said to expect him back around 8 o’clock, but I think he’ll be rather earlier than that. Wet.

It really is tipping down, and if the lightning comes any closer, I’ll turn off the computer.

Anyway, there was little sign of this earlier when we embarked on our 11th half-day of construction (I hope the mortar is well set by now as there’s little point in my rushing out to cover it up now). Dave decided to work on the pillar one-third along the next stretch of wall, as he had been pondering on it all weekend. So as to keep an unbroken line of whole bricks along the face of the footings, the brickie had not tied the supporting pillar in, but had offset its bricks for some strength. We didn’t think there was much use in doing this for its whole height, but some care was required in the design for appearance, strength and least brick-cutting possible.

A request has been made for a picture of Dave’s rear view. So here it is. 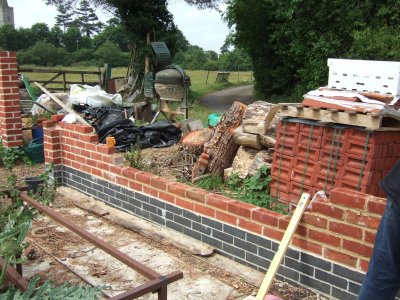 I’d love to think that, one day, I’ll show a bit of the garden that isn’t scruffy. Yes, the summerhouse needs re-felting.

Anyway, this afternoon, when it was warm and sunny, I went in to visit Al. He had taken all the fruit off the shelves and was painting the wall behind. He had some lovely local vegetables and I bought some and then went and picked more, and some fruit, from the garden. Tonight, we have new potatoes, peas, tomatoes, carrots, broad bean tops, asparagus and globe artichokes, as well as Lowestoft herrings and gooseberries. Actually, I think this is a bit much and I may keep the tomatoes and carrots until tomorrow.

I’ve brought the speech down to 1400 words and I can do that, at measured speed, in 10 minutes which is all right. We only allow half an hour for the AGM and that includes time for visitors to come in at the end – we actually aim at 20 minutes. I shall ask the incoming chairman if she’d like to give the vote of thanks at the end – in any case, my duties will end at 12.15 at the latest. And then the committee is taking me out for lunch!