It was sometime around 11 o’clock last night, when I was dismally getting to grips with the rota that was already a fortnight overdue, that I remembered that it would be the early service today and I had to be in church by 7.30 this morning. This thought made me so depressed that I stayed up for hours, mostly listening to music by bands with names such as Slobberbone. I did do some work at the same time, but I didn’t finish the rota until after 10 this morning, by which time I was due in church for the next service, An ordained life would never be for me. I have a low attention threshold and couldn’t put up with multiple daily (albeit also weekly) church attendance.

My problem was, and the reason I’d been putting off writing this wretched rota, that I’ve been losing helpers in droves. Never mind decimation, it was more like quindecimation – that is, I’d lost about 50% of the people who used to help. No, I haven’t driven them away. It’s just several of *those things*. I may ask people if they’d be willing to always do the same thing on the same week of the month – that is, if it’s the first week of the month, A reads the first lesson, B reads the second, C is sidesman, D plays the organ and E makes coffee – that way, I’d need fewer helpers overall and writing the rota would be simple, especially as some will both make coffee and read the lesson at any given service.

Anyway, after I’d printed them all off – well, not quite all as my printer ran out of ink with 2 to go – and marked them with a highlighter pen, and also emailed them out, I went back to church and grovelled to all the people on whose good-nature I’d presumed most, with such charming effect that they all smilingly agreed to do everything I’d asked and offered to do more if necessary. Manipulative? No, darlings, I just look worried and sincere. As I am, of course.

Al is very happy with his bees – I think I told the sad tale, briefly, that his bees swarmed a couple of days before he was due to divide the colony and he lost his queen. There were queen cells ready for a new lady to hatch out, so he divided them again, into two rather small colonies, and hoped for the best. He knew both queens had hatched because he’d heard them – Twitter is nothing new, honey bees have been doing it for a long time – but it wasn’t until today that he checked to see if they’d been on their maiden flight (following which they are no longer maidens and there is one drone who dies happy, whilst the rest of the drones relax their lives away with nothing to do) and they had, for there were plenty of eggs waiting to hatch. He also managed to find and mark both queens. *Result* as the young people say.

Today, I cut the first cucumber – I could have picked it a day or two ago but it didn’t go with the meals. Tender and delicious and it made me happy.

I was cycling home yesterday and the view from the dam (it’s the road that separates the fields which are part of the flood plain) pleased me, so I got off and took photos each side. Nothing special as you see, but a pleasant place to live. As you’ll have seen from my wall-building posts and the photos in them, we live a field away from the church with spire that you see in the latter two photos. What looks like long grass in the field is reeds, because waterways criss-cross the fields so that flood water drains away quickly. The water table isn’t far below the surface and it doesn’t take much rain for flooding to take place, although it’s confined to the fields and, sometimes, to the lower-lying bits of road. 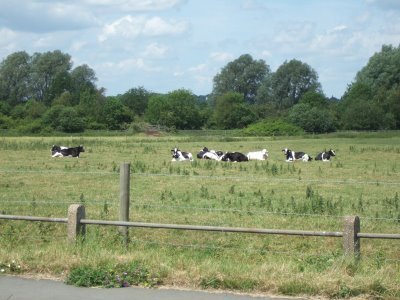 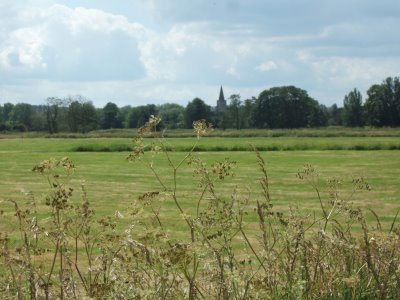 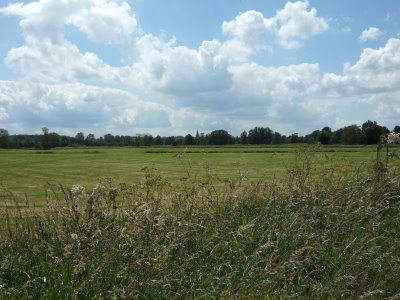 This afternoon and evening, I’m writing my valedictory chairman’s address for Tuesday morning. Yes, I’m ahead of the game, isn’t that splendid and most unlike me? Indeed, Dave would have had it done weeks ago, but I didn’t need to do it weeks ago: I need to do it now. Or anyway, by tomorrow night. I have written 866 words so far and reckon I’m more than half done. The main thing is to thank people and to leave no one out, because you don’t forget the obvious people but the unsung helpers who, modest though they are, might feel left out if they are.

Update at 11.55 – finished the speech – it’s 1579 words long, which takes ten minutes to deliver briskly. I think I might do a little paring down tomorrow – at least I’ve got a day in hand to let it settle.