Most of today has been taken up with nursing a chicken.  I went out to give the hens their breakfast at about 9 o’clock and my favourite one was having a dust bath.  So I went to give her a caress, slightly surprised that she wasn’t first in the queue for breakfast – but I leave the feeders full at night so they can eat when they want to, so it isn’t as if they’re especially hungry, they just like the attention.  Yesterday afternoon, I took them the scraps from the day and, as always, I saved her some of the best bits.  Usually, she was crowding round me with the rest but, whilst they had their heads down eating what I scattered or put in a dish for them, she always craned her neck up to receive the food I gave to her.  She was getting old and tended to have food snatched from her beak by some of the younger birds.

Yesterday, she was sitting on top of a nest box, unusually.  However, she ate the food eagerly enough, I stroked her and went about filling the feeders, taking the day’s eggs and refilling the drinkers.  I should have taken more notice, I suppose, not that there was anything I could have done.  Because today, she stayed right where she was, in the hollow she’d made in the ground.

She’s one of our oldest hens, though I’m not sure how old.  We’ve had her for at least seven years, maybe eight, but we don’t know how old she was when she came to us.  Someone asked the Sage to take a few hens and she’s the last of them.  So she could have been ten or so.  Chickens can live to their teens, but eight to ten years is more likely.

The reason I’m so fond of her is that she used to follow me around when they were free range all over the garden.  She noticed when I was carrying a spade or fork and scurried behind me, knowing I’d dig her up some worms and bugs. 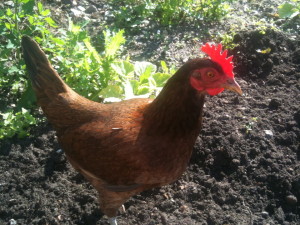 She was not a flock bird by nature, she’d chase others away rather than share her treats, though she got on with them well enough in the run.  Anyway, it seemed clear today that she had reached the end of her life and was not going to live out the day.  But she was settled, so I left her and went to tell the Sage.  I left it a couple of hours and went out again.  She’d left her hollow and was lying by the wire – I thought she’d died, but she hadn’t.  I picked her up and brought her into the porch and sat with her for a long time.  However, it takes a long time…in the end, I put her in a towel in a box and went to let the dogs out, have some lunch, make some soup, checking on her every so often.  Later, I sat with her on my lap again, feeling very sad.  I shouldn’t be sentimental, I suppose – but there it is, I am.

I left her again to feed the dogs, then went to give the chickens their snack – nothing exciting this afternoon, some spinach, cabbage and other leaves.  She was breathing, eyes closed at five o’clock, but not when I came back ten minutes later.  People and animals so often wait until they’re alone to die.

I went round the garden, looking for somewhere I could dig, but there wasn’t anywhere.  I’m not strong enough in the arm to dig through grass any more, poor old woman that I am, and I’m not going to use R’s disconcerting trick of burying a pet hen in the veg plot, for some poor sap (me) to find the next autumn when it’s time to dig the garden again.  So she’s in her box in a bag in the bin and will stay there, unless I find someone who will dig a grave for her in the next couple of days.  I’ll miss her awfully.  Many of the chickens will feed from my hand, but she was the only one who really trusted me and came to me whether I had food or not.