It’s been a memorable day, but I’ll say more about that another time.  What we’ve mostly done has been to get ready for the delivery of many tons – or, rather, tonnes – of gravel next Monday. I’ve got an area of gravel outside the house and outbuildings that, on measurement, turned out to be absurdly large and requires 40 tonnes of the stuff to add five centimetres to what’s there already.  I don’t even want to mention the cost of it, delivered.  But we may manage with three, rather than four, lorryloads.

It’s quite difficult to get reliable help, as I’m sure a lot of you know.  Young Stevo had a job until last week, when he was between jobs, and he did a great amount in a few hours on Friday.  But now he’s back at work again.  And another young man worked for me a few weeks ago and said he’d come back but didn’t – so I’m a bit pushed now for things that need muscle.  Wince is very helpful, but when I’m away he does watering and less actual gardening, because there isn’t time for both.  So weeds are growing hugely and – well, that’s that.  I’ll try to cut things down before they seed, I’ve got both flowers and vegetables and I can’t worry about it.

Ro and Dora came over for lunch yesterday with young Rufus.  Here he is. 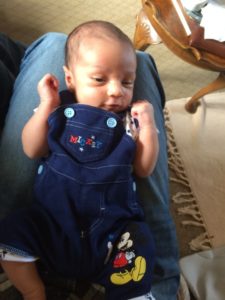 Totes adorbs, obvs.  And awake, finally.  Phil also arrived with Zerlina, just in time for chocolate cake and raspberries, as they’d brought stuff over for the bonfire.  You can’t leave DIY leftovers at the dump nowadays without paying a sizeable fee, not over a very small amount.  Al and Dilly removed the previous owners’ decking from their garden and were dismayed to discover they’d be charged 60 quid or so to get rid of it.  So it became our Guy Fawkes bonfire last year.  Weeza and Phil’s chipboard flooring, which is being replaced from the master bedroom, has been reduced to ashes now, taking some old tree stumps with it.

Tomorrow, I may talk about ants.