It’s been a brilliant day.  Lovely weather again – English people cannot go a day without remarking on the weather, whatever it is.  Every conversation includes comments on the lack of rain but an appreciation of the sunshine.  We went to Gill’s birthday party in the afternoon, left around 6 o’clock to go and put the chickens to bed, and set off for Roses’ birthday party.  In the afternoon, there was a mixture of people we knew and those we didn’t, so we chatted to everyone.  There was one almost silent girl, I still don’t know who she was, Gill and Andy’s three young grandchildren were there so, at one point, I asked her if any of them was hers.  “No!” she replied baldly and in a voice that didn’t invite any comeback and I fell silent.  I did think of something else to say and turned to her again, but she was fiddling with her phone and didn’t look up.  Gill’s mum, who is a delightful old lady who never stops talking, invited me to call round before long, so I’ve said I’ll go the week after next – this seems a long way away, but I don’t think I’ll have time next week.

I had briefly met Roses’ Boy and a couple of his friends, but didn’t know anyone else, but everyone was really friendly and chatty.  Several asked me how we knew each other.  I’m not sure if they all knew about her blog before tonight, but they do now (she didn’t seem to mind being outed).  Roses looked beautiful and was wearing a fabulous dress.  I wore my emerald ring, which doesn’t get too many outings, because it’s a bit delicate for too much daytime use and I don’t normally get out much in the evenings.

I was looking for a little card to go on her present, having sent her proper card earlier in the week, and found a photograph from my first visit to India.  Having finally found the CD to load the scanner software on the computer, I can show it to you.  We were being driven somewhere in Chennai when we saw this elephant looking in the hardware shop.  Just brilliant.  It was looked on in such a matter-of-fact way by everyone else. 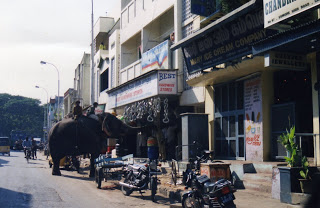