Today, I’ve been harvesting.  I didn’t grow very many vegetables this year – some peas, lettuces, runner beans and courgettes, enough to keep us going with no gluts to dispose of.  I rarely freeze veg nowadays, except as made-up dishes such as ratatouille, because I find it dispiriting, a freezer full of beans when I’m in the mood for winter vegetables, and I have too often thrown away half the frozen crop from last year to make room for this year’s batch.  However, I’ve had a surprisingly good crop of butternut squash from my two plants in pots, lots of tomatoes and half a dozen basil plants have been growing sturdily all summer.  I’ve picked loads and they’ve still kept coming.

And so I have had the feeling of being a gardener after all, in a modest way – I am deeply practical and only really feel my time is well spent in the kitchen garden, everything else is cosmetic.  I’ve picked all the ripe or nearly ripe tomatoes because Russell won’t bother (he eats fruit and veg if they’re put in front of him, while I’m away he will pretty well live on meat) and I’ve cut the basil back in case Russell doesn’t water it, and used it to make quantities of pesto.  Fortunately, I happened to buy a pound of Parmesan the other day, which triggered the thought. I have frozen seven quantities (I dolloped, didn’t measure), we will eat one fresh and I’ve given one to Mimi next door.  I’ve also picked eight squashes and left the rest to ripen until I get home.  I also have a couple of chilli peppers, which I really do hope he will water, because they are doing very well and I think I can keep them going in our porch for quite some time.

I’m aware this is pathetic, compared to what I’ve done in the past.  There was a time when we were pretty well self sufficient in vegetables during the summer, then Al opened his greengrocery and I changed to growing larger quantities of fewer things to help supply him.  I also grew lots of plants for him to sell, hundreds of them.  But this year’s late spring discouraged me and I said that the chickens could live in the kitchen garden this year.  I wasn’t quite able to grow nothing, though, and bought some plants to put out in the annexe garden.

I think that doing just a little, well within my capabilities, has been a good thing.  I’ve kept in the habit of watering daily, something I’d found a strain when it took an hour every evening (and sometimes needed doing twice in the day) and, as I said, I didn’t have any gluts to deal with, though there was a period of daily courgette eating.  Next year, I’m not quite sure what to do.  The kitchen garden is far too big for me to manage – Russell isn’t interested in the least – although it would keep us going through the year if I could cope with the work, there’s plenty of growing space.  Although we’ve dismantled one greenhouse, we still have one 40 feet by 14 feet and one that’s 30 by 8.  I would like to do more than I have this summer, though.  In addition to everything else, we need to rehouse the bantams.  They can stay in the big greenhouse over the winter, I’ve time to think about it.

I’ve also been hoovering.  I had my two cleaners here for two hours yesterday afternoon – this house can’t be thoroughly cleaned in that time of course, but they go through the rooms we’re using at the time – and they hoovered the drawing room.  An hour later, young Hadrian was found eating fluff off the carpet.  Today, it looked like shag pile, if you remember that from the ’60s.  So I got the hoover out again, the red light showed after a while so I extricated a solid ball of dog hair from a pipe, carried on but was not entirely satisfied with the result.

This is the reason. 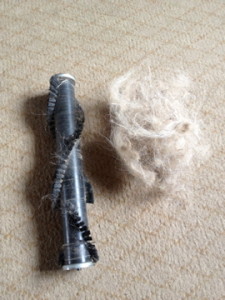 You will observe, of course, that our dog is the same colour as our carpet.

4 comments on “Z vegges out”