Look, if ever you have an attack of the runs, get yourself a bowel cancer test kit.  It’ll cure you, to say the least.  There is little prospect of me meeting its requirements.

In other news – I am exhausted.  I have very little to say this evening, mainly because I am typing so badly that I have at least three attempts at every other word.  To think that I brought up three children, every one of them entirely delightful, with no outside help (though due acknowledgement to the supportive Sage, their father) and really enjoyed it.

Not that I don’t enjoy it now, but it’s all another world from my normal life.  Small children are so full on!

Pictures will give the flavour, I’m too tired to say much, though I should point out that being the muggins at the top of the ladder while a couple of bushels of apples are being picked is a bit stressful for a woman of my age.  And we start with a picture of the gorgeous autumn colour of the Virginia creeper.  I’m glad I took a photo, the leaves may all blow off on Monday, leaving unattractive stalks behind to wither.

The forecast for Monday’s weather is dreadful.  However, I will leave then if I can, because it will be such a short break otherwise, much of which will be spent driving.  I’m nothing if not sensible and won’t take undue risks.  I recognise that East Angular is a gentle part of the country and that I may underestimate what happens elsewhere – and know what can happen and did to John when a tree fell on his car.  I’m waiting to see what it looks like tomorrow night, even on Monday morning. 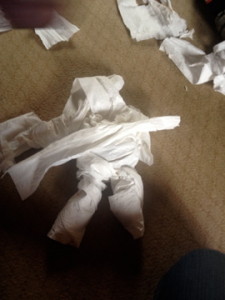 As you see, a Hallowe’en theme with lots of games. We’ve had fun.

6 comments on “Z the Granny”