Behind Al and Dilly’s house there is a fairly uninteresting piece of ground, then some fir trees and then a field that doesn’t belong to us. Back in the 60s, outline planning permission was given for housing on that field, so the Sage’s parents hastily planted the firs – but the permission was allowed to lapse and now the field is ‘outside the village envelope’ and so there is no likelihood of houses being built there, not for some years at any rate. Our land is in the same category, by the way – of even less value in fact, which is why we can have such a big garden. We let the farmer put cows on the field for no rent to keep it in good order, although we do get a grant for its environmental value.

Anyway, a few of the trees have died off over the years, but they have all been looking past their best and, if they were to fall, they could damage the bungalow, so we’ve had them cut down. Although they weren’t ‘that’ close and on the North side, it’s lightened up Al and Dilly’s bungalow no end. Today, the stumps were being removed, and we found that some of the roots were quite rotten, so it’s just as well we’ve acted now. I went to inspect the area. Al and Dilly are planning to sow grass seed and have it as an area for the children to play on. I also looked at the scrubby shrubs and trees at the West end (which adjoins our house – some of you won’t know that the bungalow was originally built, some 25 years ago, as a granny annexe to our house). These shrubs darken that end of our house and don’t let any evening sun on to the area that’s been cleared. There is a lot of dead wood and whole lots of brambles.

I’m itching, positively itching, darlings, to get going with my pruning saw.

I won’t, yet, of course, as it’s nesting season – but I have plans. I’m not letting the Sage have unfettered access, as he will take down too much, but I want to thin it out a lot.

It’s not that I have time yet, in any case. I’m starting to cautiously enjoy gardening again, and we have a catalogue to put together, and I’ve got lots of school and Nadfas work to do. But it’s so much more fun to get going on a project than just do the routine stuff, isn’t it?

Later, Squiffany phoned to tell us that the bantams were all on the patch of cleared earth, pecking away busily. They must have smelled it, as it’s well away from their usual stamping ground and around the corner of the house. Squiffany was concerned that they might get lost – but they were all home for supper as usual.

You might like to see the wisteria. I didn’t put up a picture last year, as it didn’t flower particularly well – don’t know why, as there weren’t any late frosts – but it’s back in form again. 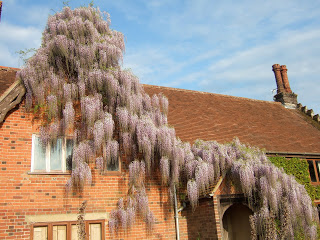 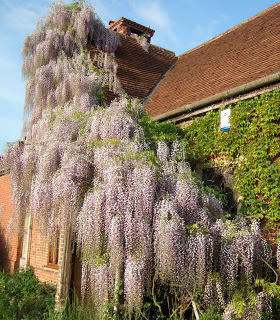