I’ve realised that I haven’t yet shown you a picture of Eloise cat, so here is one I took yesterday. 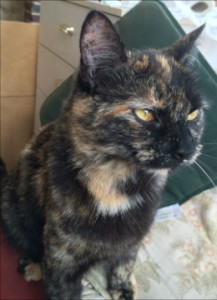 She knew that I was planning to go out, even before I went upstairs to pack my bag and she sat next to me on the seat in the porch for a long time being affectionate – I suspect, in the hope of making me feel thoroughly guilty. She won’t succeed.  What she doesn’t know is that I’ve lived with dogs for many years and they, too, will exploit the tendency of their humans to feel guilt.

Ziggi says that Eloise is as much dog as cat, having been brought up with both, and it’s certainly rather dog-like and charming that she follows me round the house and garden a good deal.  She’s a black tortoiseshell with interesting irregular markings, very attractive.  Her body doesn’t have as much black as her face in fact, I’ll have to show you another picture before long.  I sometimes think I should put pictures on my old Blogger blog, this one takes forever to upload photos.

The reason I was leaving yesterday afternoon was that I was going to visit Mike and Ann, as I mentioned before.  I received the warmest hospitality, a delicious dinner of duck casserole, trifle with strawberries, raspberries and a judicious injection of sherry, and cheese to follow.  I overate outrageously.  This did not stop me, this morning, doing the fullest justice to a plate of bacon, egg, sausage etc (I’d be embarrassed to enumerate quite how much I ate) when we went out to a splendid café with Sir B and Small Bear.  Many thanks to all for lovely company and kind hospitality.

I hurried home because I was due to get my septic tanks emptied this afternoon.  This went rather better than I’d expected actually, I thought a prompt return visit would be required, as there are two tanks, but he was able to remove all but the bottom few inches from both.

While he was doing that, I went to check on the chicks – the new mother was out in the run with several babies, six I think, but of the four eggs remaining in the nest, two were cracking and the chicks inside were cheeping loudly.  I was anxious as they were getting chilly, so held them in my hands for a while, hoping she’d go back to sit – then I tried them under the black hen, who has one chick of her own and one of the other hen’s but, while she seemed to be okay with that for a while, she clearly knew a stunt was being pulled and shifted again.  Fortunately, by that time the blonde bantam had gone back to warm her chicks and I tucked the eggs back under her.  She was sitting tight an hour later, so I’m hoping for the best.  I’m going to move the black bantam to a smaller coop (actually, what was the tortoise table – as an indoor enclosure that’s open at the top is called) as she only has two, in readiness for the other hen that’s sitting in the greenhouse.  I don’t know when she started, but I think she has up to a fortnight to go.  I’m sure I can find homes for the surplus.  Looking at the first lot of chicks, I suspect at least two of being hens and one of being a cock, but I’m not sure and I’d only be guessing with the others.

11 comments on “Z is hospitably entertained”