I’m not sure which photo better displays the full horribleness of bricklayer’s fingers, with flash or without. So here are both. 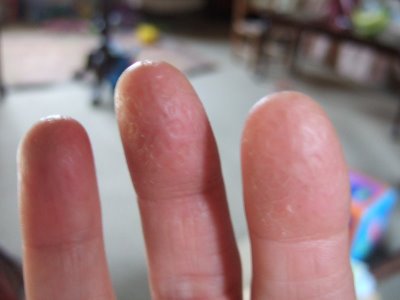 My dentist appointment was okay, and nothing needs to be done. Squiffany has been told to stop sucking her thumb, poor little thing, as it’s pushing her front teeth forward. The dentist suggesting buying the stuff you use to deter children from biting nails, so Al went to the chemist for some Stop’n’Grow. “My mother bought me that when I was a child,” I observed. “Terribly bitter, which I found intriguing, and I couldn’t resist licking it off.” But then I was always an odd child. I still like bitter flavours.

It’s a pleasant, sunny evening. The forecast for tomorrow is still rain, however.

Although he hasn’t said so in as many words, I suspect that the Sage misses Ro. He keeps asking me if I’ve had an email from him. I don’t expect to – although apparently he phoned last night while I was out at a meeting. A bank statement arrived for him this morning, which gave the Sage an excuse to phone him at work to ask if he’d like it sent on. I have to keep looking in the paper to see if there’s anything on television I might want to watch, when usually I rely on Ro telling me. There isn’t. Funny, that the more channels there are, the less television I watch.