I wonder why it is that, when I sit down to write here, I have been tending to say what I’m going to do the next day rather than look back on the last.

Probably means nothing.  Not that I’ve got such a bad memory that I can’t actually remember much of what’s happened, oh no not at all nothing like that.

Anyway, it turned out that this morning’s lecture was given by a retired bishop, and very good it was.  The mosaics weren’t quite done justice by the photos, but that’s not really surprising – they are stunning, if ever you have the chance, do go and see them.  There are several buildings to go to, it isn’t just one.

On the way in, I observed a 10p and a 20p piece on the ground, so I picked them up and put them in my pocket.  When I left, I popped over to Al’s shop for some fruit, and saw two women (a mother and daughter, I think) approaching the door and looking disappointed when they saw the notice in the window.  “It won’t be open until Friday,” one of them said.  “I’m just going in,” I said, “I’m Al’s mother – you’re welcome to come in.”  They wanted some eggs and potatoes, so I sold them.  The till was empty, but we managed the right change between us.  I went to get my stuff and another woman came in.  I explained again and sold her three chillies and a bag of greengages.  A minute later, in came a customer for some mushrooms and a bunch of bananas.  They were all really pleased.  As I looked for the key, I felt in my pocket and found 30p.  Not remembering where it came from, I put it in the till.  I locked up and left, and a few yards on, found another 20p and a penny on the ground.  I picked them up.  I meant to put them in a charity box, but my lunchtime sandwich required an odd 15p so most of it went towards that.

I ate lunch in the churchyard, sitting in the sun.  Pictures?  Of course, darlings.  They’re neither good nor interesting, but that is hardly likely to stop me. 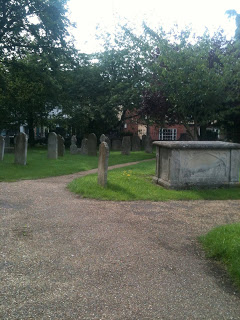 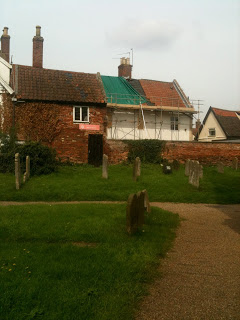 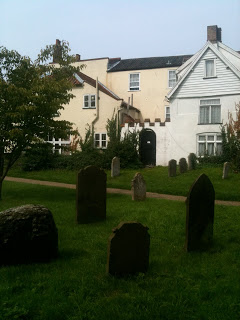 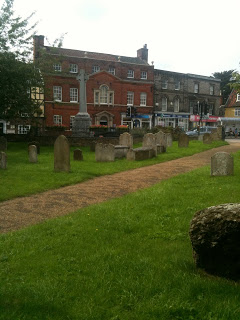 Right in the middle of the town, this is.  The second one is of the hairdresser and flat that were burnt out a few weeks ago.