We went to the Nadfas Christmas lecture yesterday, which was on Russian Christmases (Nadfas is now officially called the Arts Society, but that could mean anything from a corporate body to a club in the village hall and is, therefore, meaningless) and the charming and erudite lecturer gave a very vivacious talk with a lot of illustrations.  I particularly liked the painting she started the lecture with, which is by Ivan Shiskin and is called In the Wild North.  It seems that the image is in the public domain – the painting itself is in the Ukrainian art museum in Kiev and I don’t suppose I’ll ever see it in reality, so here is a reproduction. The painting of the tree is incredible – her reproduction on a large screen did it justice in a way that this doesn’t as it’s rather too dark; the shadow, the quality of the light shining through the branches, the effectiveness of the snow weighing on the tree – and she quoted from War and Peace, which always gets my vote. 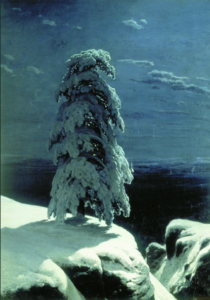 Tomorrow, we’re going to meet our good blog friends Mike (The Armoury) and Ann, for lunch, which we’re looking forward to very much.  They weren’t able to come to this year’s blog party and we haven’t been down their way either, so it’s been nearly a year and a half since we’ve seen them.  They only live a little over an hour away, we often say that we should make more effort to catch up with friends.  I only saw Sir Bruin and the Small Bear a few months ago because I was visiting a friend in hospital near them, and imposed on them for a cup of tea afterwards.  And I visited Rev Dave a little while ago too, but it’s not much really for a sociable Z.  I do invite you all here, of course – every year for the blog party, but you’re always welcome if you’re in the area.