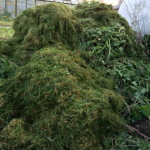 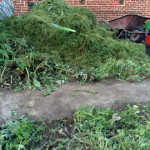 It’s been busy.  However, I’ve got a good amount done, far more than I expected, in the garden, made Cake and entertained Dilly and the children and Charlotte, Mim’s mother (Mim stayed in the annexe for several months last year before heading to Australia).  I haven’t managed to mow all the lawn, because it needed raking as well as using the grass box, because the clippings just went everywhere.  But the big beds in the kitchen garden that were completely overgrown have been cut down and the compost heap is suddenly enormous – I’m not sure if the pictures show the scale.

The garden is a huge concern to me, as there is far more than I can cope with and it’s just a matter of hacking back what I can, for the most part.  I enlarged the veggie garden at the time we built the Wall, but now that Al and co don’t live here and he isn’t a greengrocer any more, we don’t need that much space.  Last summer, I left the bantams to use the kitchen garden, but now I’m taking it back again.  But the six long, narrow beds that I used to use are plenty for me now, so I’ve decided to grass over the extra space, add a few small apple trees and make it into a pleasant space.  I’d planted out the beds by the Wall, but then Russell dumped a whole lot of stuff there and killed off my plants, so I’m taking them back and, as originally intended, I’m going to replant with a lot of bee and butterfly-friendly perennials, scented for my pleasure too, and I’m hoping to make it my haven.  It being next to the kitchen garden is a plus, because I enjoy growing vegetables more than any other sort of gardening.

There is so much work to do though, I’m tired at the thought of it.  When I came to sit down on the sofa this evening, my hip hurt so much that I yelped and had to try several angles before I got down here, and then couldn’t sit up again without a lot of pain.  There’s no point in fussing, it’ll have to be a lot worse before I have a replacement joint.  I’ve overdone it this week, that’s all, and it’ll get better in the next few days.

The house is big for the two of us, but that doesn’t matter – housework is a doddle compared to gardening and one doesn’t need to clean the bedrooms that aren’t in use every day, or even every week.  But the land is another matter, and I don’t quite know how to manage in the long term.  We could be smothered by thorns like Sleeping Beauty for all Russell cares though, he is blissfully unaware of the problem, so it’s up to me to find answers.  And problem-solving is what I like doing best.  Very satisfying, finding a way out of a tricky situation.

6 comments on “Z drinks a lot of tea”