Squiffany chose to spend the afternoon with me, which was a delight. I was digging the bed at the base of the section of wall that Dave finished last Friday – here follows the dullest photos of the year – 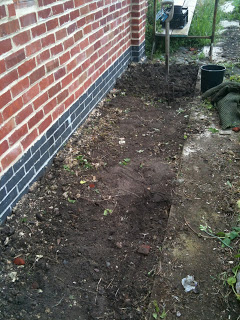 and Dilly came along to fetch something from the greenhouse. She said to the children that she was about to prepare lunch, and Squiffany whispered to her, received approval and invited me and the Sage to join them.

After lunch, Squiffany helped me in the greenhouse for an hour, then we came in and played board games, then cuddled up on the sofa together with orange juice and biscuits to watch a DVD – it’s such a compliment when a child wants to spend time with you. And it meant that Pugsley had some time alone with his mother.

I’m vacillating a bit on whether to plant things in that bed or put them out in pots. Next year, I’d like to plant some fruit trees, but this year I’ll use it for peppers, aubergines and tomatoes. I think I’ll probably do the pots – it’ll mean more watering, but then the bed would need daily watering in any case. Apart from the asparagus bed, which wasn’t weeded at all last year and is beyond redemption, the veg garden is getting quite tidy. Oh, and apart from the bed where I used to grow herbs. There still are some, but they’ve been overcome by such nuisances as tansy. I think that I’ll have to chop it all down and smother it with old carpet. I can’t dig out those roots. I’ve taken cuttings of perennial herbs. As for the asparagus, it’s a very old bed and needs to be replaced. Again, I’ll cut it down, cover with old carpet to smother the weeds and start again with new asparagus in another bed.