Well, it wasn’t messy at all.  They put dustsheets over all the furniture and floor, but it was all remarkably clean.  If the chimney liner had been installed properly in the first place, it might have been okay – but this one has a 35 year guarantee, so it’ll see us out.

I was given my cherrypicker ride, huzzah!  Yesterday, the weather turned drizzly, on and off, and Stuart wanted to seal the joint on the chimney, but the ‘picker wouldn’t go up and it turned out that the weight limit had been set to 120 kilos so it wouldn’t take the weight of the cement.  So he put some of it in another bucket and did it in two goes.  I knew I weighed more than a bucket of cement (obvs, darlings) so gave up hope – but still put on jeans this morning, just in case – he managed to fix it to its usual weight limit of 200 k this morning and it was bright and sunny.  So up I went.  It was brilliant, as I knew it would be.  And pictures are best here, so I’ll shut up now … or rather, I will in a minute or two.

For those who don’t use it, Facebook shows you posts you put up on the same day in the past.  And six years ago today, the Wall was being completed as far as I was concerned, though I was away the next week so Dave and the Sage finished the capping.  And a year later, the drive was being resurfaced, after some months of preparation, because we were widening it too. 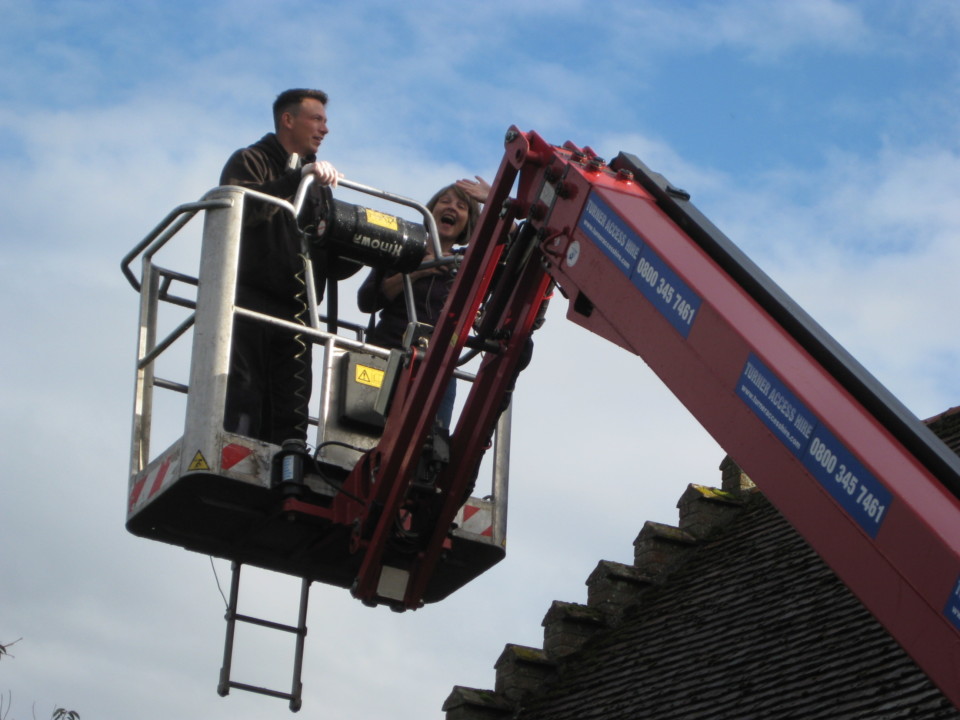 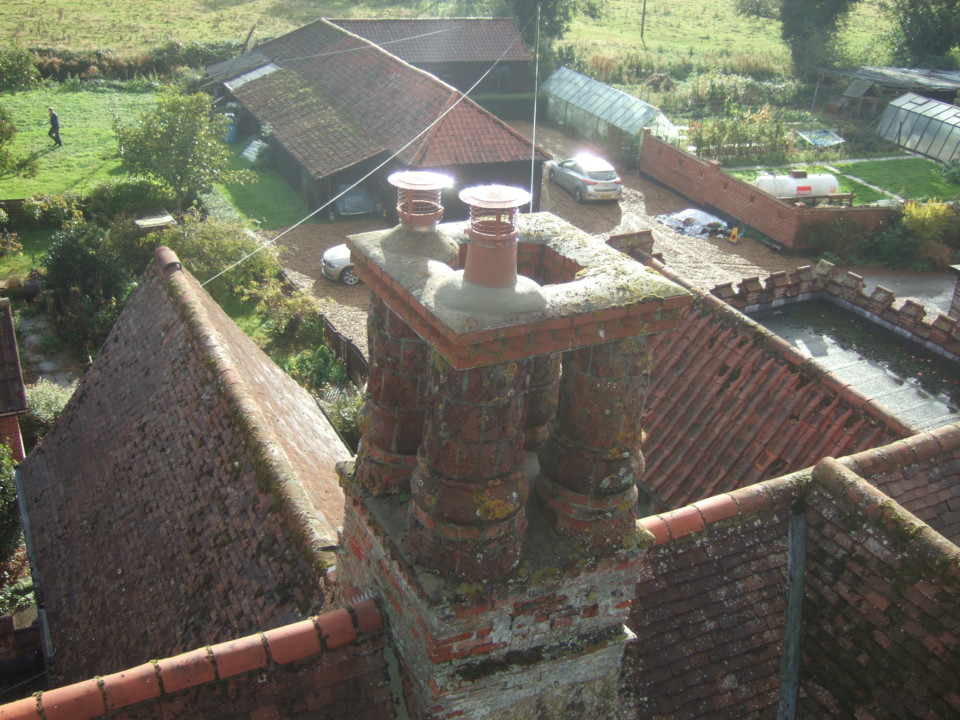 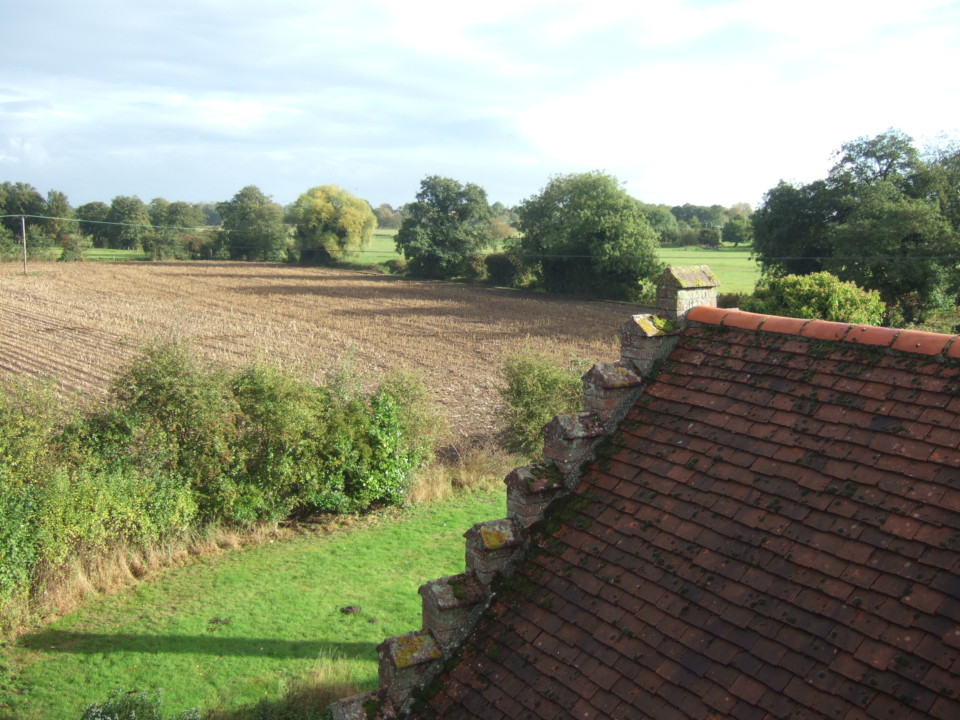 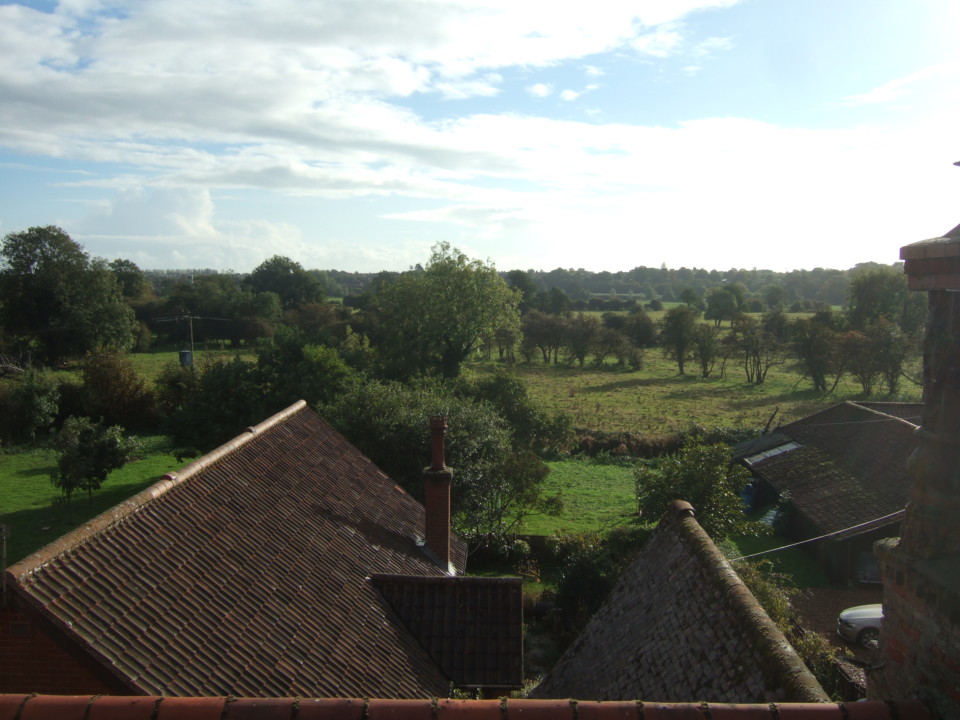 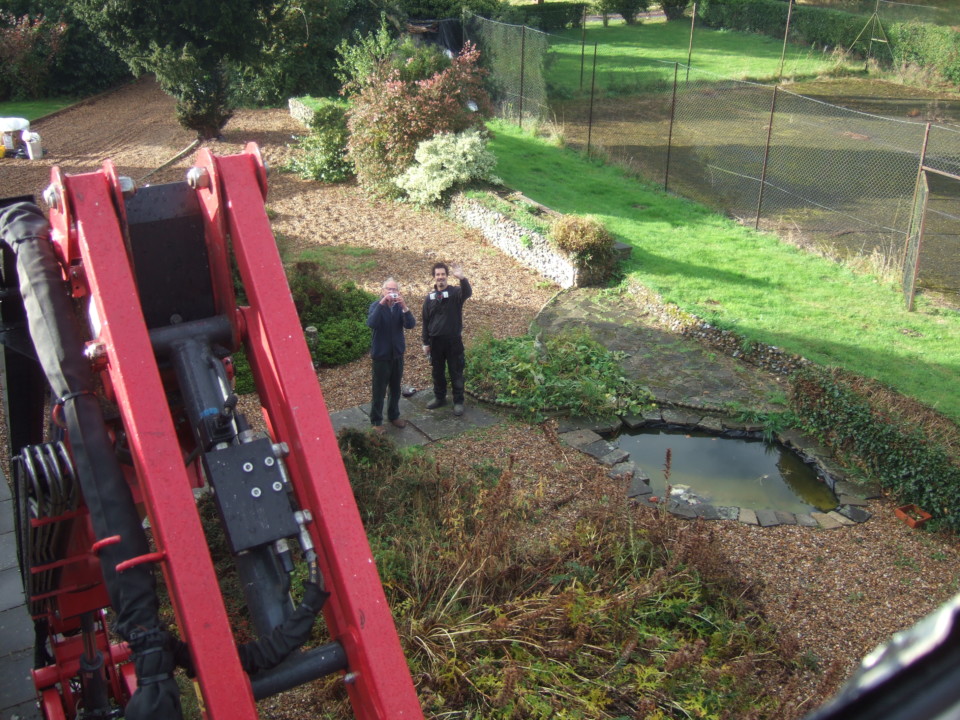 Snapping in all directions, including straight down!  Tim took my picture as I took his – the first two were taken by him, of course, the rest from my perch.  Weeza noted the water on the flat roof, so I’ll have to investigate that – probably a blocked downpipe, doubt it’s anything awful but it’s a good job it’s been photographed as it needs sorting out before the winter.  I’ll shin up a ladder at the weekend, if someone can put it up for me.

I’ll take a picture of the new stove to show you, of course, but that’ll have to wait until tomorrow.  If you are on Facebook, I’ve put up two panoramas, only friends can see my posts of course, but if we are friends, you’re welcome to send a request – just message me to say who you are, I don’t befriend strangers, of course.  I’m under my new large surname.

The two installers, Stuart (on the cherrypicker) and Kiwi (on the ground by LT), were very clean, efficient and really nice people, as is the owner of the company, Justin.  We were really impressed.  And Stuart and Kiwi thanked us for our hospitality as they left.  Wasn’t that nice?  Though LT does make exceedingly good coffee…

4 comments on “Z and the raising agent…”