The day would have been perfect if Weeza’s car hadn’t broken down.  It all worked out all right – she’s vastly appreciative of the RAC breakdown man who came out on Easter Sunday and took it to the garage, and of Ro and his friend who, having just arrived here from Norwich, turned round and went back again to fetch her and Zerlina.

I knew nothing of this until I arrived home from church.  Phil had cycled over so wasn’t involved it the kerfuffle.  It didn’t actually delay lunch at all, as I’d planned it for 1.30 and they all were aiming to arrive early, so we carried on with the birthday celebrations as soon as everyone turned up.

I forgot to take a picture of the birthday fairy cakes, but they had either chocolate or strawberry icing (some of each, that is, it’s not that I’ve forgotten) and the candles were in the shape of letters, so spelled out “birthday” and the last one said “girl”. 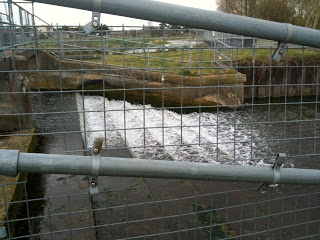 Afterwards, most of us went on a health-giving walk over the Three Bridges and across the marsh as far as the weir.  Here is a picture of the weir.  There are pictures of the weirdos, but I suspect permission would not be given to publish them, so sorry.

I checked my diary and I don’t need my car for the next few days – actually, as long as I can borrow someone else’s in the family on Thursday evening, I don’t need it for ten days – so I’ve lent it to Weeza and Phil.  He had to leave his bike behind, but if he wants it they can always come over and he can cycle back again.  He’s got this week off, so he doesn’t need it to get to the station.