“Here comes the Sage” observes someone, as we were just preparing to leave the church.  “He’ll be coming to check I’m on my way,” I said confidently.  “We’re due to leave for Zerlina’s birthday party in half an hour.”  I was wrong.  He was coming to tell me something rather more surprising.

He’d gone off in his van to fetch the Sunday paper from the shop a couple of kilometres away (neater than a mile and a quarter, don’t you think?) and on his return, less than ten minutes later, he found his way blocked. 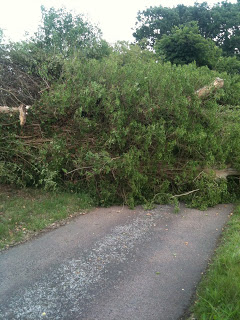 He has a way of telling things that always confuses me, so I got the wrong end of a very big stick at first, and thought that he was telling me that the big oak tree had fallen down. 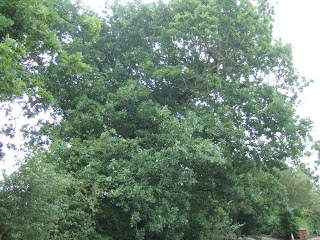 The tree that has fallen died back badly about twenty years ago, so we had all the main branches removed, in the hope that pollarding it would stimulate it into growth again.  It didn’t work, the tree did die after a few years and we’d just left it ever since.  It would have been a pretty large undertaking to remove it.  Today, it was not that windy – a gusty breeze, but the Sage said that some of the gusts were quite strong.
As you can see, it was completely over the drive and had also brought down the fence to the Ups and Downs, as you can see here. 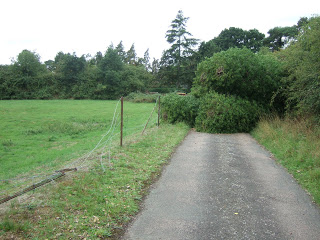 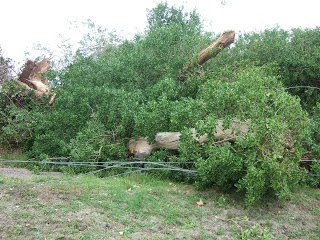 It was fairly evident that we were going to be late to the party.  The Sage had already phoned our lovely friend, who has a chainsaw and is quite kind and helpful enough to turn out on a Sunday lunchtime to use it – he was out, but expected home soon and his wife, who is as helpful as he is, cheerily said that lunch would be postponed while he helped us out.  Of course, Al and family were as stuck as we were, and we were also going to pick up Ro and Dora – in fact, a couple of other families were going to the party, which was mainly a barbecue,  and playing in the garden for the children as they are all very young.
Good Friend with Chainsaw arrived soon afterwards to inspect the situation, then went home for said saw and got back at 2 o’clock, by which time I’d cut off a lot of the ivy.  All the greenery you see is ivy, the tree is completely dead.  In fact, here is the root end.  It had powdered away. 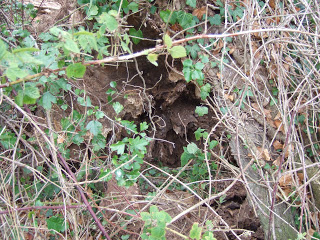 The four of us – Good Friend, the Sage, Al and I – worked for three-quarters of an hour and cleared enough space to get a car through.  He’ll come back another day and cut the rest up. 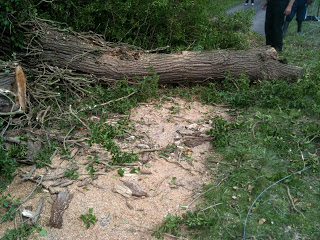 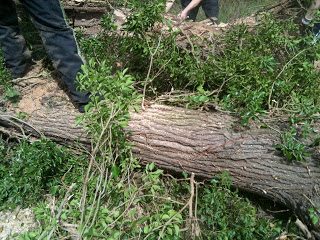 So, an hour and a half late for the barbecue, but it didn’t matter – Weeza’s childminder had lent her her bouncy castle for the weekend and there were various other garden amusements, and after we’d eaten, the children played ‘Pass the Parcel”and it was all very jolly.

One could say that we were lucky that no one was hurt, but really it would have been very unlucky if anyone had happened to be in the way at the time.  But it was quite enough drama for one day.
Not sure if there will be any usable timber – probably not, as it had to be cut up into liftable chunks.  But we’ll have plenty of firewood for the winter.