…but not in Edweena’s case.

I’ve been a bit anxious about Russell’s tortoise, because it has been such a mild winter that she hasn’t been able to hibernate very deeply and so would have been using more of her stored reserves than if she was in a very sound sleep.  But Russell has been hankering after more tortoises and negotiated to buy a couple of babies.  It was Tortoise Club last night, so he returned with them, warm lights, vitamin and mineral supplements and bags of chalk.  Only trouble was, from my point of view, that he’d said he was bringing back something for them to live in too – he reminds me of being in India.  If you ask a driver if he knows the way somewhere, he’ll always say yes because he thinks it’s more polite and helpful, even though getting lost isn’t helpful at all.  Anyway, they’re only little, so it was no problem to find a large plastic box for the time being.

Today, I set it up for them with earth (actually compost, and I need to get sand too), several lumps of chalk and a dish of water, I started them with a nice warm bath and then Russell fetched Edweena the Incontinent Tortoise.  The instructions said you should take the lid off the box so that she could start to warm up slowly, she might move in her sleep but when she opened her eyes, after about an hour, she was awake.  She was looking about in ten minutes.  So I gave her a nice warm bath too and went to empty another box. 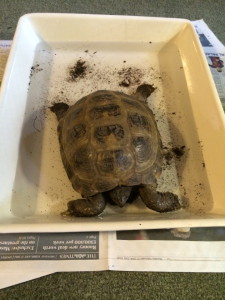 Here she is in her temporary home. 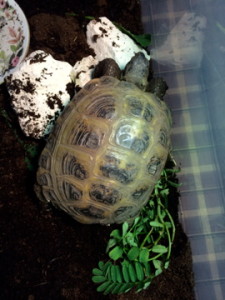 Here are the tots – 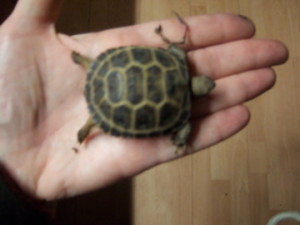 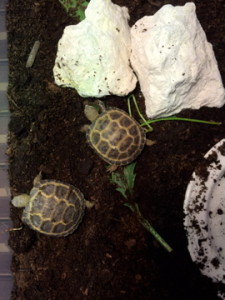