Here are some pictures of the Great Tortoise Run. 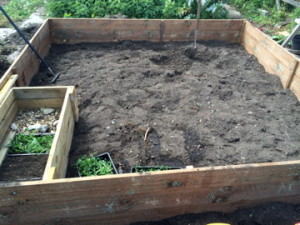 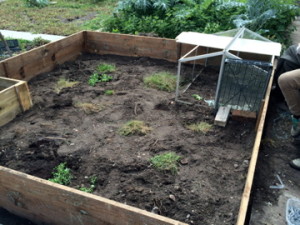 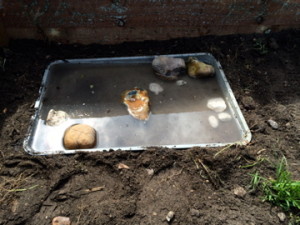 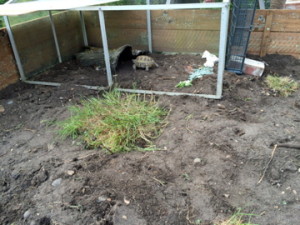 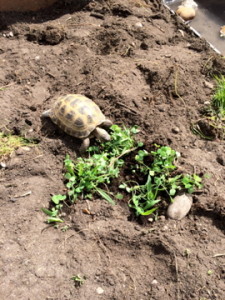 Having dug over the area, we put six-inch wide scaffold planks around it, three high, so that Edweena couldn’t climb out. She’s a keen climber. It’s still a work in progress, but she has several clumps of grass and I planted out some weeds that I’d grown for her – plantain, vetch, clover and something else that I can’t think of at the moment.

She was tremendously excited and spent a long time exploring the area and nibbling the greens,  The babies were also pleased with their little run – the main reason I’ve given them a small run of their own is that I’m afraid of a crow or hawk catching them, so I wanted a space small enough to keep covered.  I think they’re fine – it’s the size of four large seed trays, and they’re not much more than a couple of inches long.  I’ve put pieces of bark for them to hide in and gravel, soil and weeds, with pieces of chalk and bigger stones for interest.

After the excitement of the day, it turned colder and Edweena has been quiet.  She didn’t want to eat and hid in the corner of the cold frame.  Today, it’s been hot and sunny and she’s perked up again.  We’ve made quite a fuss of her and she responded. 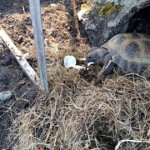 I’ve had one rose bush in flower for several weeks, and today it occurred to me to offer them some petals. Well, it went down a storm. They all adored them – Edweena ate four petals in a minute or two and the Tots ate their petals while I was watching Edweena, I didn’t see the going of them.

In addition, I weighed and measured them today. 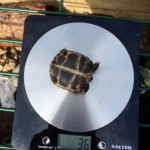 Here’s the Dark Tot – actually, the weight fluctuated and I’ve written it down as 37 grams, with their shell length as 5.5 cm. They are both exactly the same size. Edweena weighs 830g and I measured her as 15 cm, but later I discovered (before I did the Tots) that I hadn’t done it quite right, so she may be a little longer. I’ve calculated their weight/bone density ratio and they’re fine. Must be doing something right. It’s all a lot more work than I ever imagined, though. I had to buy scales that weigh in 1-gram increments specially, too.

5 comments on “The Great Tortoise Run”