1 I’m sorry, whingeing as ever, but another almost sleepless night – asleep for an hour, awake for at least three, the soundest hour’s sleep after the radio alarm comes on.  This afternoon, I was told I looked tired.  No, really.  REALLY?

2 Brace yourselves, you’re getting a look at my next passport photo.  If I tell you this is probably the best passport photo I’ve ever had, do feel for me.  One isn’t allowed to smile nowadays, of course.  But I’m convinced that I still don’t look so old and I know I don’t look so frightened as in the picture that was taken ten years ago. 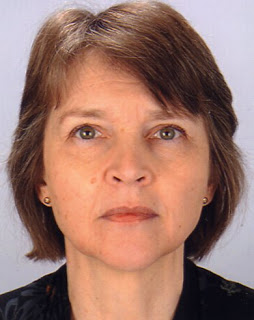 I know.  I’m not claiming to look good.  But you’d not mess with me, right?

Anyway, the point is, I popped into the local photographer’s to make an appointment.  “Oh, I think Phil could do it right now if you like?”  I nearly ran for it.  But I asked for a mirror and used a comb instead and the deed was done.

3 Equally good service was received at the local garage.  Yesterday, I heard a knocking sound from the back of the car – no, no one was locked in the boot.  So I toddled in, and Graham came for a turn round the block with me to listen for himself.  He has a couple of ideas and doesn’t think it’s serious.  But it’s a bit more today than it was yesterday, so I went in to book an appointment.  They’re fitting it round my social life, darlings, can anyone be nicer?

4 This afternoon, we went to the memorial service of a lovely, lovely man.  He was 93, it was more a time for loving memories than great shock and grief, though his wife and family must feel it sorely.  But it was a fine service.  Afterwards, we went back to the house for tea – there was a marquee on the lawn.  Tea there was, but most people headed for the other table and picked up a glass of Pol Roger.  I know.  No pretension I assure you.  It comes naturally to them.  I’ve a feeling that the truly classy went for the tea, but I didn’t.

5 Picture of Augustus.  So delightful, how soporific eating can be for a small child. 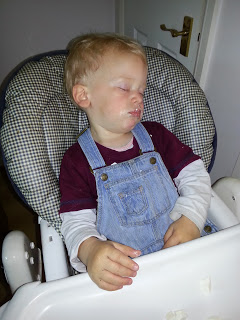