I know I’ve told the story of my great-grandmother and the heliotrope here before, though it was probably a few years ago.  That was about the colour, but of course that’s the colour of the flowers.  It’s a half-hardy annual and not hard to grow, with a sweet scent, especially in the evening, but I never see it for sale.  I grew them once, a long time ago – about 35 years, I should think; certainly before we lived in this house.  I bought a packet of heliotrope seeds this year but they were sown late because of the cold weather and I didn’t put them in the propagator because the weather went straight from cold to hot.  Another time, I’d start at the right time in controllable heat, because only one plant came up.

It has thrived, however and I put it in an old sink with alpines – it’s grown bigger than I expected, probably because of daily watering, but never mind, it’ll only be there until the first frost.

This is just the preamble to a few photos.  Starting, of course, with the heliotrope.  I think it should be more grown, it’s a lovely colour and a delightful scent.

Here are a couple of photos of Eloise cat.  I took the first one because she blended in so well with the garden chair, but the sun had retreated slightly by the time I took it, so you can only see near her tail where the colour is a rich brown.  The second one, she’s lying on the paving and she blends in with that too, without sunshine. 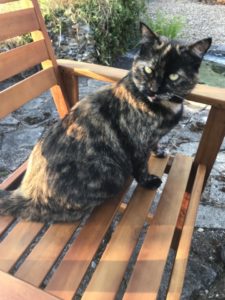 When we arrived home the other day, I went out to pick the first sweetcorn of the year for dinner.  And today, I picked the first two figs – but we scoffed them before taking a photo. 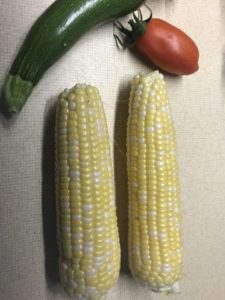