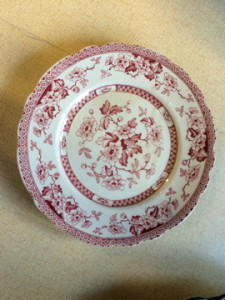 This plate belonged to Mrs Nichols. It was part of her wedding present service – she was born in about 1884 and married at about 20. We bought the service from her when she was 100 and had to give up her house and move into a nursing home.

Yesterday, I put it in the dishwasher. I’ve just cooked a rasher of bacon on it in the microwave. Neither of these was invented when it was made.

Just a passing observation. I like to use those plates. A tiny, trivial bit of social history.

It’s not often that I mix the various social media, but this is what I put on Facebook today.  I added that the apparent staining is actually bacon fat, the plate is just out of the microwave. I turned the Aga off on the 1st July and am aiming for the end of August before I put it on again, though I really don’t like cooking on my table top cooker plus microwave.

When I took the photo, I couldn’t remember the lady’s name and, for a few minutes, thought it was gone forever.  Russell would have known, he had a fantastic memory.  But it came back to me.  Russell did a lot for her when her house was cleared and I helped too, now I think of it, and we wouldn’t take any payment.  She insisted on giving us something, however, and we finally agreed that she could give the children Premium Bonds.  She left Weeza and Alex £200 each in her will, but then Ro was born and she didn’t want to change it, so gave him the same amount directly.  By the time he was about eight years old, he’d won £250, not a bad return.  Weeza had one win of £100, I think, which she invested, mostly, in a piece of Nanking China – we didn’t buy at the auction, but from a dealer, who had bought a large quantity for his gallery.  As I remember, she paid about £80 for a small teabowl and saucer.  She was twelve at the time – yes, it was an unusual choice for a child, but it was her own decision.  We’re like that.

It was the last day of term today, so I went into school to give hugs to teachers who are leaving and generally to spread goodwill and bonhomie.  Within minutes, I’d been nobbled to judge a cake baking competition.  Well, I was in my element!  I grabbed a friend, who’d called for the same purpose and we ate twelve cakes – a mouthful or so of each.

They weren’t all perfect.  A few were a bit dry, having been overcooked – none was burned, mind you.  A couple had broken as they came out of the tin and some creative icing was needed.  Two were nearly all icing.  Most were delicious, all were good.  We agreed on the winners, however, and gave first prize to a lovely, light sponge filled with strawberries and cream, and prettily decorated.  All entrants were girls, now I think about it.  They’d made onion focaccia bread (is adding ‘bread’ tautology?) in the morning, which also went down well.