Blogging may still be spasmodic for a while, I’m afraid.  I’m doing my best to keep up but I’m so busy all day and tired in the evening – I suspect that I’m finally finding out what is normal to most people.  As I write, it’s only half past seven and I’m wondering how soon I can decently go to bed.

I’ve been very pleased, however, with how well the introduction between the big and little tortoises has gone.  Edweena eyed the Tots with a jaded glare at first and, though she doesn’t do anything to injure them, she barges close to them and makes them scuttle.  However, she’s just asserting herself and it’s fair enough, she doesn’t hurt them and they seem to get on perfectly well.  This is what I found this morning, an hour or so after I’d put their heat lamp on. 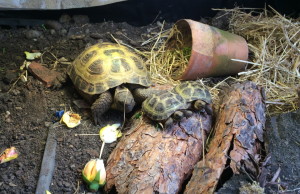 Isn’t that adorable?  I weighed one of the Tots later, she was 55 grams.  I’ve mislaid the sheet of their progress this summer, but I think that in about April, they were 32 g.  One has to be careful not to overfeed, but their shells have grown too and they are clearly very healthy.

By the way, if you wonder about the flower, it is indeed a rosebud.  Rose petals are one of their favourite foods.  They like a range of flowers, including violas, honeysuckle and mallow, as well as the leaves of those and many other plants.

They love burrowing into hay, but I’ve just (while looking for their weigh-in sheets) found an information list – it seems that hay and straw shouldn’t be used for bedding.  Oh.  I’ll have to ask at Tortoise Club.

Among the many things I haven’t mentioned recently is the fact that our phones and printer both stopped working about three weeks ago.  We have only used our landline for 0800 and similar numbers for ages, because mobile calls cost nothing extra on our contracts, so we didn’t realise for a few days, until we were told that people had left answerphone messages.  I’m still not sure whether the printer was a software or a hardware problem – but I’ve been waiting for it to pack in, it was years old and I really wanted a wireless printer.  And it’s lovely, o quick and quiet.  This afternoon, I needed to use the scanner – same thing.  Really happy with it.  My first printer, which lasted for years and had been expensive, was very quiet but its replacement wasn’t – however, it was a fraction of the price, so I assumed that was the downside.  This one was also *surprisingly affordable* but seems much better.  Likewise, the phones, though replacing ones that are only a couple of years old, are much cheaper and I like them better.