Of all the shocking statistics of the First World War, one of the most shameful is that hostilities didn’t cease on the morning of Armistice Day.  Between the signing of the armistice at 5 am and when it came into effect at 11 am, the killing continued.  863 men, I think it was, died in those 6 hours.

As always, the congregation listened intently as the Roll of Honour was read out from our three villages for the two wars, 25 men having been lost from my own little village in the first war alone.  I say this every year, but I’m afraid I’m still going to.

I didn’t let anyone down, I’m relieved to say, I played the Last Post and Reveille to the best of my ability, right speed, no fluffs, no wrong notes and I remembered to set the stopwatch so that the silence was exactly two minutes.  Several people thanked me afterwards, which was kind.  I wasn’t anxious on my own account, I promise, but not to let the occasion down.

I nearly came unstuck last night, mind you.  I was cooking dinner, mind drifting over this and that, and i suddenly remembered that I’d said I’d do an arrangement for the altar, which I’d meant to do on Friday and, failing that, on Saturday first thing but it was raining then.  I hastily grabbed a basket and secateurs and went into the garden to pick greenery, then scampered down to the church after dinner and did a speedy job with foliage and poppies. 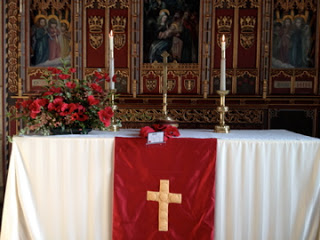 And this morning, just in case I had forgotten, Gill brought some greenery so that she could rescue me if need be.  Isn’t that lovely?  Friends do look out for each other, it’s so kind.  I had to do it by 8 o’clock this morning though as there was a service then too.  Frosty overnight it was, but it’s a sunny day now and, I’m told, it’s set to warm up this week.  I’m glad to hear it.  The Aga receives its annual service on Tuesday and we’ll have to turn it off tomorrow night in readiness.