For the second time this year, I’ve managed to catch a heatwave whilst Norfolk – and, indeed, much of England – was having rain and chill for the time of year.  So sorry, darlings.  At least, this time, it was in a part of Europe where you’d expect such weather, though the first few days were exceptionally hot.  I even became slightly pink on an upper arm, despite my care in sunny places.

Pam and Peter are very hospitable and great fun, Corfu is beautiful and surprisingly natural – by which I mean, it’s such a popular holiday spot that you’d be forgiven for thinking that it’s a built-up tourist island, but it really isn’t, for the most part.  P&P live in a village called Sinarades, which is a south of the town and near the west coast, and is a pretty good starting point to get to anywhere within an hour or so.

I didn’t take many pictures, Tim has a few more which I expect he may post, but here you are – the first was on the plane.  There’s a picture on the back of each seat with safety information, nowadays, but we puzzled to work out what you’re not meant to have in an emergency landing. Not wearing spectacles nor high heeled shoes was clear, but should you take out your false teeth or put down your cheese sandwich?  The one that foxed us, though, was the third picture, that looks like a face and an ear crossed through.  What is forbidden there? 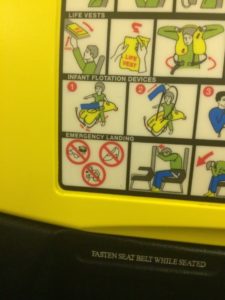 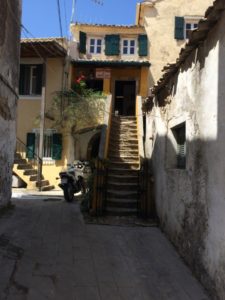 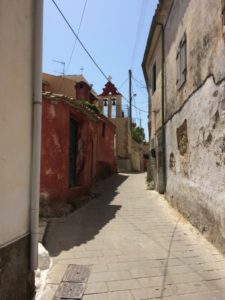 Another side street view in Sinarades 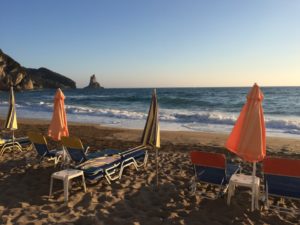 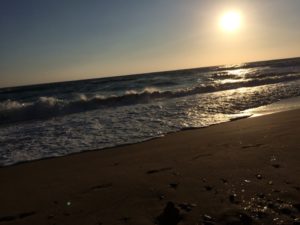 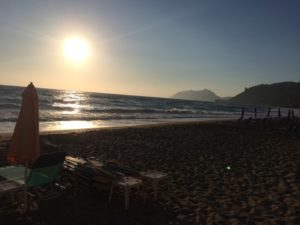 On our last evening, the sea was rough after a calm week, though people were still in the water.  The small son of the restaurant owner (in the local small  town where P&P frequently eat) was having a great time, standing knee-deep to face the waves, which lifted him up and carried him back to the shore.  His grandmother and a man were watching attentively, he wouldn’t have had more than a ducking if he’d lost his footing, but he was confident and sturdy, it was fun to watch.

LT suggested I take a picture, but didn’t think of it until after dinner when the waves were dying down.  So these don’t show what it was really like!  But the second and third were taken only a minute or two apart, which does show how quickly it was settling back to calmness.

Back to rainy England that evening and more of the bemusing car-crash that is British politics at present.  We were glad to be out of the country for more reason than having a lovely holiday with friends.  I was particularly glad not to have internet.  I think the only thing to do now is mock all of them, frankly.

8 comments on “Did you miss me, darlings?”